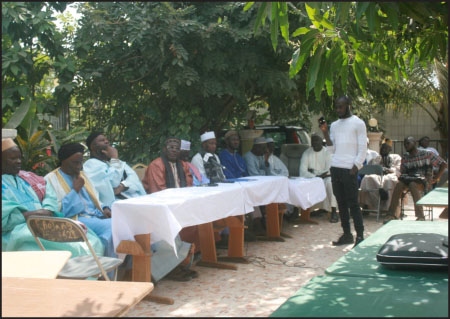 This development came barely months after they urged the country’s supreme Islamic council to call a congress for election of a new executive. According to them, the current executive’s term has long since ended.

“I want to assure all Gambians that the task given to us will be executed according to the people’s wish. And as from today, we are ready to join our hands with people who are ready to solve the country’s problems,” President Hydara assured the Islamic Ummah.

He therefore called on all Muslims in the country to come together and join hands to work for the peace and stability of the nation, saying “there cannot be any peace in the country in the absence of religion.”

Baba Aboubacarr Drammeh elaborated on the formation of the GSIC in 1992 and noted that appointing new members to take up the positions of the new SIC after the expiration of term of office of the old executive members is “legal, welcome and accepted by all the Muslims in the country. We should not continue sitting waiting for them after their refusal to leave office when their term has ended many months ago.”

In his explanation, he said since the inception of Supreme Islamic Council in 1992 under the leadership of Alhaji Ebrima Soriba Gassama and blessed by the late Gambia ex President Sir Dawda Kairaba Jawara, there has never been an election of executive until the Second Republic, under former President Yahya A.J.J. Jammeh: “And that election was held in Mansakonko, Lower River Region,” he disclosed.