The Gambia Armed Forces have emerged champions of the National Inter-departmental Football Tournament (NISA) after beating the National Water and Electricity Company Limited (NAWEC) 1-0 in a well-contested final played at the Serrekunda East Mini-stadium on Friday.

Both sides launched series of calculated assaults on each other’s goal-mouth but failed to produce a goal in the first half.

Upon resumption, Armed Forces re-grouped themselves and mounted heavy pressure on NAWEC and as a result, they opened the scoring through winger Bakary Jarjue, alias Figo, in the 47th minute thanks to a clinical finish from Yusupha Jammeh’s cross.

NAWEC fought back by creating numerous goal-scoring opportunities but squandered all their chances much to the advantage of Armed Forces, who went home in joyous mood as they celebrated a narrow 1-nil victory.

As champions of the tournament, Armed Forces went home with a giant trophy and a cash prize of D12,000, whilst NAWEC received D8,000 as runners-up.

Gampost, the 3rd place holder, received D6,000, and the Ministry of Health and Social Welfare were crowned the most disciplined team of the tournament.

Armed Forces, in this respect, will represent The Gambia in the sub-regional football tournament to be hosted by Senegal later this year. 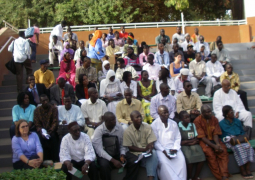