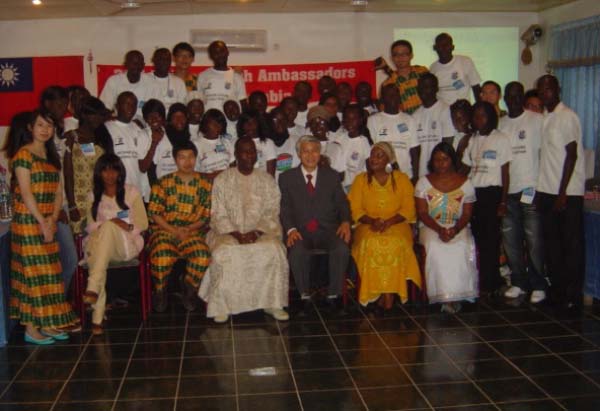 The 2011 group of Taiwan youth ambassadors to The Gambia on Friday wrapped up their visit in the country.

In his address to the youth ambassadors and their Gambian counterparts at the Baobab Holiday Resort in Bijilo, the Taiwanese ambassador to The Gambia commended the young Taiwanese emissaries for their visit.

“On behalf of the embassy I would like to thank the group from Taiwan for the visit,” Ambassador Richard Shih said.

He also hailed the local Gambian students for their participation in the activities of the 2011 Taiwan Youth Ambassadors to The Gambia.

He stated that the exchange of culture between the two countries is essential. “His Excellency President Jammeh always says that Taiwan and The Gambia are sisterly countries,” said ambassador Shih.

The Taiwan diplomat also commended the two countries’ ministries of foreign affairs for making the 2011 Taiwan Youth Ambassadors to The Gambia programme a success.

Mawdo Juwara, permanent secretary of the Ministry of Foreign Affairs and a former Gambian ambassador to Taiwan, congratulated the young Taiwanese for a successful stay in Banjul.

He hailed the bilateral ties between The Gambia and Taiwan expressing hope that “it will go from strength to strength”.

PS Juwara applauded the personal efforts of Ambassador Shih in making the event a reality.

The principal assistant secretary at the Ministry of Youth and Sports, Ana Jobe, used the forum to reaffirm her ministry’s commitment to empowering the youth.

Jaina Jagne from the Ministry of Higher Education said that being sensitive of other people’s culture is essential.

At the end of the ceremony prizes were given to some local students for their exceptional performances during the cultural encounter.

Eight Taiwanese students led by their professor spent two weeks in the country with thirty local students from different higher institutions of learning, in a programme organised in collaboration with the National Union of Gambian Students led by Alkali Dibba.