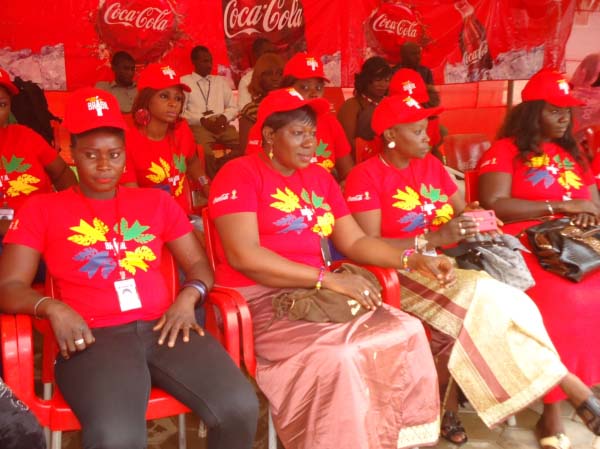 In his remarks, the Human Resource Manager of Gambega, Saja Sambou, said 5 by 20 entrepreneurship skills development project, was initiated by Gambega Company for women in The Gambia.

Sambou said the project was intended to develop about 100 women entrepreneurs in the country in 2014.

He thanked the management of Gambega for making the initiative successful.

He urged the beneficiaries to take their business seriously to help themselves and contribute to national development, as well as to meet the President Vision 2016.

John Bass, finance and supply chain manager of Gambega Ltd, described the launching as a milestone for the beneficiaries, adding that the training was important as women “are the pillar” of business in The Gambia.

He noted that some countries had already registered and were in the process but said Gambia would overtake those countries because Gambian women are very committed to anything concerning national development.

In his launching remarks, Eugene Allen, country manager of Gambega, said the project marked a significant milestone in the development of the business of Coca-Cola Company and the continued efforts and drive for women empowerment in The Gambia.

“We at the Coca Cola Company, we believe women are a powerful global economic force but one that is consistently undervalued,” he said, adding that 5 by 20 is their global commitment to enable the economic empowerment of 5 million women entrepreneurs by 2020.

Specifically, he said they would focus on the small businesses the company works with in over 200 countries around the world.

“Women around the world are already pillars of their business system. We are building on that foundation by implementing programs to help women own their businesses all over,” he added.

He said that in the 5 by 20 project, they collaborate with the government, non-Governmental organizations, civil societies and other business partners to address the most common barriers women face when trying to succeed in business.

The initiative offers women access to business, skills training courses, financial services and network with peers and mentors, along with the confidence that comes with building a successful business. The whole objective of the project is to create a sustainable livelihood for these women for a sustainable community, thus creating a sustainable economy for the nation.

So far, the initiative had been launched in over 20 countries including Liberia and Ghana in the West African sub-region.

Already, there have been reports of some significant successes registered by some of these women since they started their businesses in less than one year, particularly in Liberia as a case in point.

He said they trained the first batch of women who are going to benefit from the project in terms of giving them the requisite training, capital in the form of trade equipment and products to kick off.

They have initiated the process and procedures for the second batch and by the end of the year, they are expecting to train and set up one hundred women entrepreneurs in The Gambia.