GAF on Saturday beat Interior 3 sets to one to lift the Gambia Volleyball Association (GVBA) volleyball knockout title in a well-contested final played at the Manneh Sillah Memorial Court in Banjul.

The most anticipated GVBA knockout final, which showed an astonishing exhibition of skills and panache, attracted spectators from Banjul and its satellite areas for the weekend’s biggest GVBA knockout final between the household names of GAF and Interior.

Interior defeated GAF 3sets to one to grab the GVBA volleyball female knockout title in a tightly-contested game played at the Manneh Sillah Memorial Court the same day.

As champions of the male category, they went home with a trophy and cash prize of D5,000, whilst Interior received D3,000 as runners-up.

The GVBA also awarded the Ministry of Youth and Sports, the Lord Mayor of Banjul City Council and Muhammed Lamin Saidykhan of West Coast Radio with certificates for their immense contribution towards the success of both the league and the knockout championship 2013/14. 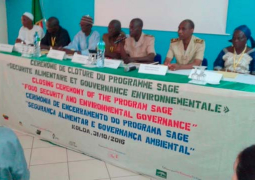