A murder charge has been brought before the Banjul Magistrates' Court against four police officers of the Gambia Police Force.

However, their plea could not be taken as the trial magistrate told the court that the alleged offence happened at Jimara district in the Upper River Region, so it would be proper for the accused persons to be tried in that particular jurisdiction, where the alleged offence was committed.

The prosecuting officer, Sgt Manga, told the court that the case was for mention, and for the court to remand the accused persons in custody.

The trial magistrate subsequently ordered the accused persons to be kept in custody pending the commencement of the trial.

According to the particulars of offence, the four accused persons, on 27th January 2011 at Numuyel village in the Jimara district of the Upper River Region and diverse places in The Gambia, murdered one Dembo Sibi, by beating and tying him with a rope causing his death. 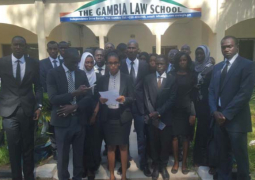