Today September 21st is being observed as International Peace Day. The theme for this year’s observance is “Sustainable Peace for a Sustainable Future”.

The UN General Assembly in 1981 declared that this was a day devoted to strengthening the ideals of peace, both within and among all nations and peoples around the world.

However, this year’s Peace Day came at a time when many countries across the world are either in conflict or recovering from devastating effects of war, such as Mali, Syria, Libya, Ivory Cost, Sudan, Kenya and the activities of Boka Haram in Nigeria.

Other than these and many problems in the world, many countries especially in Sub-Saharan Africa are facing food insecurity due largely to the 2011 crop failure.

It also came at a time when the Muslim world is trying to cope with the aftermath of the cartoons and films produced to ridicule Muhammad the prophet of Islam which, no doubt, constitute a serious offence against Muslims.

The video is extremely offensive, and is a gross abuse of freedom of expression by those behind it, and we seriously condemn the act. We urge that those who made the film in the US and cartoon in France be all prosecuted.

To us, these kinds of activities could jeopardize world peace, and we hold that no one should condone them as they undermine our peaceful existence.

We, therefore, support the proposal of the grand Imam of Cairo, Egypt, who is calling on the UN to pass a resolution banning provocation of Islam and other religions.

Islam is a religion of peace, and no one has the right to abuse or show rudeness to our Prophet Muhammad (SAW).

Therefore, for there to be sustainable world peace, there must be respect for all religions.

As Muslims, we should not allow any one or group to show disregard to our Prophet and that is why many people, especially in the Arab world, have vow to sacrifice their blood in revenge for any attack on Islam and the Holy Prophet (PBH).

As we mark yet another International Peace Day, we urge all and sundry to work towards maintaining global peace, and not to engage in any activity that would undermine peace.

While we call for calm among the protestors, we equally call for an end to such acts that can offend the Muslim Ummah. 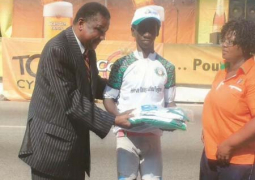