The case involving Mass Kah, a Foroyaa messenger, who was charged with sedition, could not proceed on 13 February 2014 before Magistrate Isatou Janneh of the Kanifing Magistrates’ Court.

The defence counsel, Lamin S. Camara, called and asked for adjournment, according to Sgt 3560 Colley, the prosecuting officer.

Sergeant 3560 Colley was expected to reply to the no-case submission made by defence counsel Lamin S. Camara.

The case was then adjourned till 24 February 2014.

According to the particulars of offence, the accused, Mass Kah, on 14 November 2013, between 16:00hrs and 17:00hrs, at Latrikunda German, within the KMC and diverse areas, with willful intention, uttered a statement against the President’s photo which one Lamin Camara was pasting on his vehicle opposite a tailoring workshop, saying: “Why not paste the said photo of H.E. the President on the sky?” and thereby committed an offence. 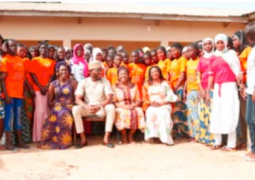