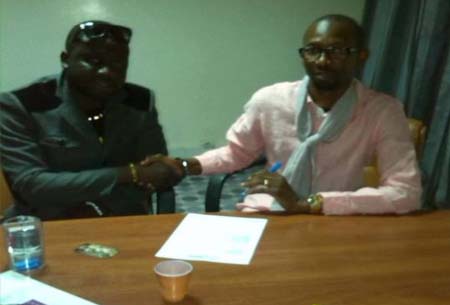 The deal includes plans to produce TV series that will be aired weekly and repeated up to two times in a week to produce, direct, write and act in the TV series.

Development on these projects was planned for late January this year, according to both parties.

“After a whole week of negotiations with the management and team of TFM, I finally got a deal. I had an intensive indoor meeting with the King of mbalax, the owner of TFM Youssou N’dour, with his managers and advisers, who really loves and appreciates my productions,” Sisqo said.

He added that after his presentation, he wasted no time to give a big applaud in his charming voice, without second taught.

He said N’dour promised to have a great partnership and everlasting relationship with 2-RAYZ SYNDICATE.

Sisqo explains that at the end of the meeting he entertained them with nice jokes and believes he can transform them into a TV series.

“Then I was redirected to Mr Ndiaga Ndour the new Managing Director of TFM, to have a general meeting about the agreement deal, terms and conditions and the whole production at large,” he said.

He describes the deal as a homecoming of sort, reuniting him and some other renowned actors.  “I will also strive to promote new talents,” he concluded.

Meeting with kings of reggae

Over the years, Sisqo has had the opportunity of performing with many well-known musicians, such as reggae legend Peter Tosh in Jamaica (where Hinze’s CD, King of Reggae, was recorded), the great producer Michael Gibbs in London, and The Brecker Brothers in the USA.

Many of these performances were recorded.