Principal Magistrate Dawda Jallow of the Banjul Magistrates’ Court has scheduled 1 December 2014 as the date to deliver judgment in the trial of Mambanyick Njie, former permanent secretary at the Ministry of Youth and Sports.

The prosecution had called several witness in support of its case, including the officials of the then Gambia Football Association (GFA).

The particulars of offence stated thatMambanyick Njie, on 1 March 2012in Banjul, whilst serving as permanent secretary Youth and Sports, wrote a petition to the Office of the President stating that the ex-Gambia Football Association (GFA) Executives were engaged in malpractices and never gave a thorough account of the imprests given to them for international matches and, therefore, soughtapprovalto dissolve the saidGFA Executive, information he knew to be false or did not believe to be true. 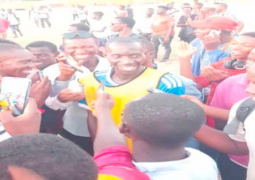