A charge of abuse of office was yesterday brought against two former senior officials at the Ministry of Local Government and Lands before acting-Principal Magistrate Taiwo Ade Alagba of the Banjul Magistrates’ Court.

According to the alleged offence on count one, in 2006, at the department of Lands and Surveys in Banjul, being employed in the public service and by virtue of their positions as the Director of Lands and Survey, abused their office by allocating a plot of land at Old Jashwang belonging to one Alhagie Karamo Mustapha Ceesay (Alkalo) to Elton Petrol Company without his consent.

Also, count two stated that, in 2006, at the department of Lands and Surveys in , being employed in the public services and by virtue of their positions, facilitated the transfer of ownership of various plots of land to Malamin Kala Bojang, Sheriff Kuyateh and Aji Amie John respectively, without following the proper proceeds.

Defence counsel, Lamin Camara, applied to the court to grant bail to the accused persons since the alleged offence is bailable, adding that the charge before the court is a misdemeanor not a felony.

Counsel Camara said he recognized that bail is at the court’s discretion.

Camara further argued that the charge before the court is a substantial charge and not a holding charge, as the investigation was completed.

He added that his clients were in custody for nine days for such a misdemeanor, stating that the accused persons are prominent members of the society, and they have sufficient sureties who are able and willing to stand for them as sureties, if the court grants them bail.

In response, the police prosecuting officer, Superintendent Sainey Joof, told the court that the prosecution was objecting to the application made by the defence counsel for bail on behalf of the accused persons.

He added that the accused persons were handling top offices in that department, and if they are granted bail they could influence the prosecution witnesses.

He said that the investigation was far from over, and the charge before the court was just a holding charge, and urged the court to refuse them bail.

Magistrate Alagba, in delivering his ruling, stated that he had listened to both sides, and what is for determination was whether the accused persons would not tamper with the investigation, since the prosecution is saying the investigation was not completed.

He said the court believed that the accused persons were once occupying top offices in that particular office, and there was likelihood that they might tamper with the investigation.

He consequently remanded the accused persons, and urged the prosecution to try and complete their investigation within a week.

Falcons FC sail to next stage in East Nawetan 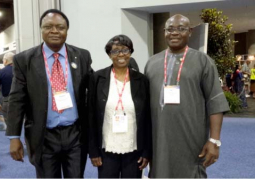 A trying moment for communities!