The sense of jubilation in the offices of The Point as we as a collective staff watched Barrack Obama cast his vote in this year's historic American election was palpable. The feeling of hope that has spread all over the world because of his candidacy has been truly remarkable. This morning it is unlikely that we will know for sure who has won the contest. We pray that Barrack Obama has done so but American politics is notoriously unpredictable and the electorate dangerously fickle.

In the first piece of good news to come from stateside Barack Obama came up a big winner in the presidential race in Dixville Notch and Hart's Location, , where a tradition of having the first Election Day ballots tallied lives on. Democrat Obama defeated Republican John McCain by a count of 15 to 6 in Dixville Notch, where a loud whoop accompanied the announcement in yesterday's first minutes. The town of 's Location reported 17 votes for Obama, 10 for McCain and two for write-in Ron Paul. Independent Ralph Nader was on both towns' ballots but got no votes.

With 115 residents between them, Dixville Notch and Hart's Location get every eligible voter to the polls beginning at on Election Day. Between them, the towns have been enjoying their first-vote status since 1948.

Being first means something to residents of the , home of the nation's earliest presidential primary and the central focus - however briefly - of the vote-watching nation's attention every four years.

Voting was carried out in a room in a local hotel festooned with political memorabilia from campaigns long past. Each voter gets an individual booth so there are no lines at the magic hour. The votes were quickly counted, announced and recorded on a posterboard that proclaims, "First in the Nation, Dixville Notch."

Although scores of states have voted early, the two villages are the first to officially announce the results on Election Day.

Hart's Location started opening its polls early in 1948, the year Harry S. Truman beat Thomas Dewey, to accommodate railroad workers who had to get to work early. Hart's Location got out of the early voting business in 1964 after some residents grew weary of all the publicity, but brought it back in 1996. Dixville Notch, nestled in a mountain pass 1,800 feet up and about halfway between the and the Canadian border, followed suit in 1960, when John F. Kennedy beat Richard M. Nixon. Nixon, the Republican, swept all nine votes cast in Dixville that year, and before Tuesday, the town had gone for a Democrat only once since then. Let us hope that this year they get their wish and Barrack Obama is not only their next president but also the President of the entire Untied States.

"Victory has a thousand fathers but defeat is an orphan."

Journalism from The Gambia's Perspective 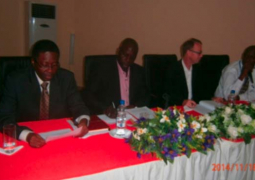