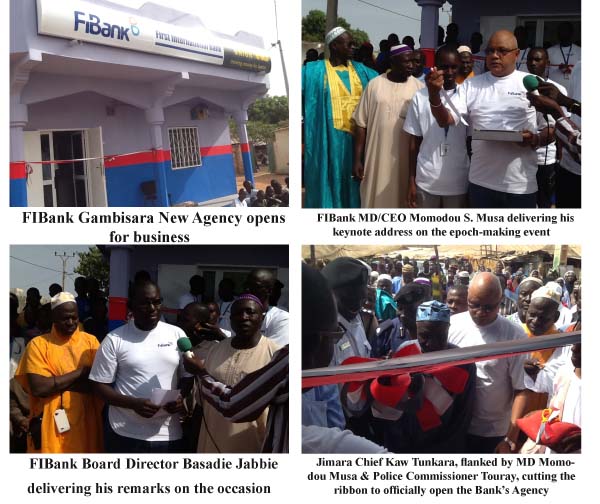 The opening ceremony, which took place on Saturday, 6 March 2014, is a demonstration of FIBank’s continuous efforts at taking banking to the doorsteps of everyone in The Gambia.

It can be recalled that in 2008, First International Bank opened a branch in Kanilai, Foni Kansala, and remains the only Commercial Bank in the West Coast Region of Foni and now the only Bank in the Sarahullay community of Gambisara.

This clearly demonstrates the Bank’s local commitment to the development of rural Gambia.

Extension of the Bank’s products and services and proximity of its networks, especially to those unbanked population, is a significant achievement.

First on the programme schedule was Qur’anic recitation led by the Grand Marabout, Imam, Alkalo and the village elders.

The ceremony was graced by the Assistant URR Governor, URR Police Commissioner, Chief of the area, the National Assembly Member of Jimara, and other invited dignitaries.

He further reiterated that the Bank has a stock of initiatives aimed at meeting the banking needs of the people.

Whilst expressing his appreciation and gratitude on behalf of the Bank, he assured the people of Gambisara and communities that the Bank will provide Products and Services that meet the needs of the people.

“FIBank has become a household name when it comes to making banking needs available to everyone everywhere,” he said.

The Managing Director/CEO of First International Bank, Momodou Musa, who initiated the project and finally got it inaugurated, was filled with joy and a sense of gratitude towards the people of Gambisara in seeing the occasion become a reality.

According to MD Musa, FIBank is very passionate about fulfilling its Corporate Social responsibilities and promised that the Bank will give back to the communities through essential social support programmes.

He assured the community of the Bank’s commitment to delivering efficient and effective banking services.

According to him, “the setting up of an Agency in Gambisara is part of FIBank’s expansion strategy”, particularly in the rural and unbanked communities.

“The opening of Gambisara is quite significant and conforms with our strategy to provide accessible services to our growing clientele,” MD Musa said.

He continued: “FIBank is the only Bank that has a presence in the Foni Region and today we have done it again.

“Today, here in Gambisara, we are opening our doors as the first and only Bank to serve Gambisara, and all satellite villages.

“You do not have to travel to a distant place to do your banking or receive your Money transfers. You can do it all here.  Having your account with FIBank Gambisara, means, you do business in any other FIBank Office be it in Banjul, Basse, Serrekunda, etc.

“For example if want to buy goods in Banjul you do not have to travel with your money in a car to Banjul anymore; you can deposit the money here in Gambisara and receive it in Banjul when you arrive.

“Your family can also send you money from Banjul by paying the money into any FIBank office and you receive it from Gambisara.”

While calling on the people of Gambisara and its satellite villages to support and patronize FIBank, the Managing Director also pointed out that about 70 to 80% of the population is not exploiting banking services such as Current Accounts, Money transfer into and from the region, Savings, and small and medium financing schemes.

“Over this period we have opened 8 Branches and Gambisara is our newest outlet,” the Managing Director said, adding: “With your support this Agency will both succeed and grow in size.”

In line with the Bank’s corporate social responsibilities, MD Musa presented a brand new desktop computer, a printer and a photocopier to Basse Police Station through the Commissioner of Police – URR.

This, he said, would help support the work of the police in URR.

MD Musa also used the occasion to thank the Central Bank of The Gambia for approving the establishment of the Agency.

A member of the Bank’s Board of Directors, Mr Basadie Jabbie, also expressed his heartfelt appreciation and gratitude to the people of Gambisara.

Director Jabbie recognized that banking has become a key fundamental requirement to the people of this region, while giving assurance of the Bank’s commitment to delivering the most required banking needs and therefore called on all and sundry to open accounts now with the bank and be among the millions to enjoy their services.

He also noted that FIBank has recognized “the challenges the Sarahullay community are faced with in receiving their remittances, mobilizing funds for future use and the risks associated in holding physical cash”, saying all these put together would be a thing of the past,  hence FIBank is here to meet their financial needs.

“Take this bank as your own, patronize this bank, protect and stand by this bank at all times; the bank is here just for you,” says Director Jabbie.

The NAM for Jimara ward, Hon. Jawo, thanked the Management and Staff of FIBank for this laudable achievement, saying that other banks should emulate FIBank.

He also thanked the Government of The Gambia under the able leadership of His Excellency The President of The Republic of the Gambia, Alh. Dr Yahya A.J.J. Jammeh, for the peace and security in the country.

While calling on his people to patronize FIBank, Hon. Jawo expressed gratitude and appreciation for having this bank in his constituency.

He assured the Management of the bank that his people will support the bank in its every move.

The Police Commissioner for URR also echoed his appreciation for the initiative.  He called on the people of URR and Jimara Constituency in particular to patronize FIBank at all times.

The Commissioner also assured the Management of FIBank that the donated computer set would be used for its rightful purpose, adding that the police force is looking into the possibility of providing a security checkpoint at the border between Gambisara and Senegal.

For their parts, the Imam of the Village, the Chief, the Alkalo, all echoed their heartfelt appreciation and joy over the opening of the new FIBank Agency in their locality.

All these speakers assured the Management and Staff of FIBank for their continuous patronage and loyalty at all times.

The account opening session of the programme witnessed a long-awaited queue by the people of Gambisara, members of the satellite communities, Local Associations, schools, and businesses.

The event was finally concluded with a Sarahullay cultural dance.