We would like to reaffirm our support for the activities of the Gambian Committee on Traditional Practices, GAMCOTRAP, especially in its fight against Female Gender Mutilation (FGM).

We hold that FGM is a harmful practice that has no place in contemporary society. Regardless of its traditional justification, FGM as practised in most African societies does more harm than good, leaving most girls scarred for life.

Long before now, many African societies, including in The Gambia, had denounced female circumcision because of the negative effects of the practice. So, the crusade against FGM is not an imposition from the West.

FGM is one of those many cultural practices that have not served Africa well. Moreover, just because it has been handed down to us by our forbears does not make it right.

It is known to have posed health problems that affect the marital bliss of most women. Besides, it has been known to ruin the lives of some women, as it made them sterile. Widely seen by many as a health hazard, FGM is said to be one of the main reasons for the high rate of maternal mortality and infant death in many African countries, coupled with other practices, such as early marriage.

According to the World Health Organisation, an estimated 100 to 140million girls and women worldwide are currently living with the consequences of FGM.

In The Gambia, according to experts, despite the downward trend, the prevalence of FGM remains on the high side, with 78.3% for women aged 15 - 49.

Despite the best efforts of GAMCOTRAP to stop this harmful practice, it is still being carried out in some communities in The Gambia.

The dropping of the knife in some communities over the years, represents a big victory for GAMCOTRAP. But a lot more needs to be done.

The National Assembly should enact a law that forbids female circumcision and makes the practice an offence.

Considering the gravity of the harm that results from FGM, we believe that only a stern measure can deter people from continuing the practice. 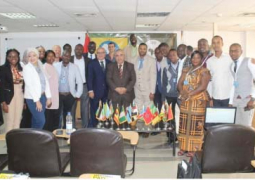