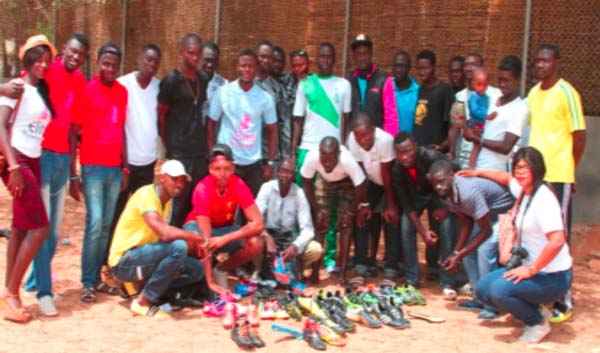 Speaking at the presentation ceremony, Fatou Matta Coker-Jallow who is not only helping health and sports but modeling and everything that has to do with helping youths fulfill their dreams, create jobs as well as contribute to national development, said ‘making money is not everything’.

Fatou Matta who some time ago also supported the team with jerseys employs over 40 Gambian youths at Elite Modeling Agency, and said among her aims is ‘getting youths off the streets and create employment for them’.

Nyaw Kebba Ceesay, team manager Fajara South FC, in receiving the boots described the gesture as a custom by the donors, since they have been supporting the team over the years.

He stated that the donation came at the right time, and will help the team greatly. They will make best use of the boots, he added.

He went on to thank the donors and teams they got the boots from, and also called on others to emulate the donors.

Malick Jallow, Fajara South team captain, expressed gratitude to the donors for the gesture, adding that the team has been together since their childhood and the donors have been supporting them since then.

They hope the partnership will continue to grow from strength to strength, he added, while thanking and praying for them.

Sulayman Jallow said the boots were given to him by his team, Hissings Backa FC and Vannersburg FC in Gothenburg, Sweden.