The Food and Agriculture Organisation representative to The Gambia has said that FAO telefood funded projects in the country provide direct assistance to food insecure communities.

Dr Babagana Ahmadou made these remarks at the launching of six telefood projects at the Kaira Konko Scout Centre in Soma, LRR.

The small-scale projects are expected to help local communities to produce more food to attain household food security as well as increase their income.

“These telefood projects are on honey production, small ruminants, poultry and fishing and course ways to rice fields to the beneficiaries such as Sikunda, Suloko, Dankunku, Darsilameh, Kani Kunda and communities in LRR, CRR and NBR,” Dr Ahmadou said.

Telefood is FAO’s global effort to raise awareness about hunger and food security. It is also one of the responses to the 1996 World Food Summit called Action to Eradicate Hunger.

Since its inception in 1997 the telefood initiative of the FAO has enriched the lives of many developing world including The Gambia, according to the world food organisation.

“To date about 50 telefood projects have been launched in The Gambia including the ones launched today, and these projects were in horticulture, fisheries, forestry, livestock, food processing among others,” the FAO boss said.

Alpha Khan, director of Freedom from Hunger Campaign (FFHC), estimates that per capita consumption needs in cereals in the country is about 175kg of which 117kg is rice and 58kg is coos grain, which includes millet, maize and sorghum.

According to the food security situation and response strategies to food crisis situation, Mr Khan disclosed, household food security has eroded severely due to low, erratic and unevenly distributed rainfall, as well as low production, encountered.

Consequently, rural farmers are compelled to sell their produce immediately, which usually results in income loss and lowering food stocks which could take them through the hunger season.

“Raising awareness about the problem of hunger mobilises energy to find a solution,” he noted.

In 1997 FAO launched telefood campaign of concerts, sporting events and other activities, to harness the power of media celebrities and how citizens can help to fight hunger.

The six telefood projects launched were designed to achieve food security through honey production, fishing, and meat and rice production, with a total budget of almost US$46,000.

For his part, the board chairman of FFHC, Dumba Manneh, urged the beneficiaries to uphold the projects with all seriousness to ensure its sustainability.

He commended FAO for its “true support” in the fight to bring about food security at the household level.

Madam Iddy Jallow, who spoke on behalf of the beneficiaries, hailed FAO for its laudable gesture in complementing government’s efforts at achieving food self-sufficiency for the people.

Other speakers on the occasion included Ablie Drammeh, a Peace Corps volunteer who serves as advisor in honey harvesting. 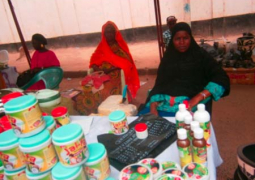