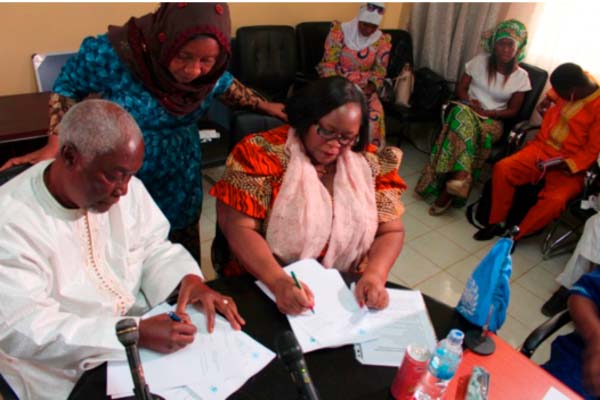 The Food and Agriculture Organization of the United Nations (FAO) and the Ministry of Agriculture (MOA) Friday signed a US$6.2 million agricultural project entitled “Adapting Agriculture to Climate Change in The Gambia”.

The signing, held at the ministry’s conference room, was presided over by the Minister of Agriculture Omar Jallow and FAO country representative Dr Perpetua Katepa-Kalala.

Speaking at the ceremony, Omar Jallow, Minister of Agriculture, said the overall goal was to support the government of The Gambia and her people to become climate resilient, by mainstreaming both immediate and longer-term adaptation measures into broader development framework at national level, as well as diversifying and strengthening livelihood and sources of income for vulnerable people in the intervention areas to reduce risks to climate change.

According to Minister Jallow, the budget for the project was US$6.2 million for over four years covering North Bank Region, Central River Region and Upper River Region.

These, he said, are the regions that are most vulnerable and exposed to climate impacts, with no-access or low-access to information, knowledge and education and income targeting 5000 households in 10 districts.

The Agriculture Minister further stated that the project seeks to reduce poverty on rural households, address food insecurity and malnutrition through increased agricultural production and productivity and commercialisation by strengthening the livelihood and resilience of the targeted households and farming systems.

In addition, the project would aim not only to diversify agricultural production towards more drought tolerant crops, but it would also promote and support livelihood alternatives.

He added that the interventions would enable its beneficiaries to better cope with climate change and adapt their agricultural practices, including livestock management.

“Women in particular 70 percent of the targeted households will benefit from more secure livelihood assets, through the establishment of community gardens, with irrigation systems, honey and poultry production,” he said.

Minister Jallow thanked the GEF for agreeing to fund “this very important project”, and FAO for their longstanding and continued support to the ministry and the country.

Also speaking was the FAO country representative, Perpetua Katepa-Kalala, who said the project aims to support the implementation of immediate adaptation priorities in the agriculture sector identified in the National Adaptation Programme for Action (NAPA).

She said the objective is to promote sustainable and diversified livelihood strategies for reducing the impacts of climate variability and change in the agriculture and livestock sector.

She also dilated on the project, stating that it is in line with the FAO-Gambia country programme framework, one of whose pillars focuses on resilience and climate change adaptation.

The FAO country representative thanked all the stakeholders and partners, for the commitment manifested during the development of the project document.

She also thanked the government of The Gambia through the Ministry of Agriculture for the fruitful relationship with FAO and partners enjoyed by the Gambia government.

The FAO remains committed to working closely with the government of The Gambia and all relevant stakeholders in the agriculture and natural resources sector for the attainment of its goal, the FAO country representative said.