Jarra Banora, Gunjur Jarju and their children: a son and a daughter were arraigned before Senior Magistrate Abdoulie Mbacke of the Kanfing Magistrates' Court, charged with assault.

In her testimony, Jarra Banora told the court that one Sunkaru Camara is the owner of the compound where they are residing.

She adduced that her husband and Kebba Drammeh, who is the husband of the complainant, Sally Senghore shared the same mother.

She testified that she had a son called Lamin Jarju who went to the compound with a bicycle at the time of breaking their fast.

She further testified that it was the complainant who went to her door and hit her. She said she too also hit back, and as a result a fight ensured. 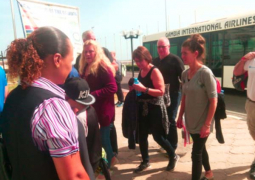