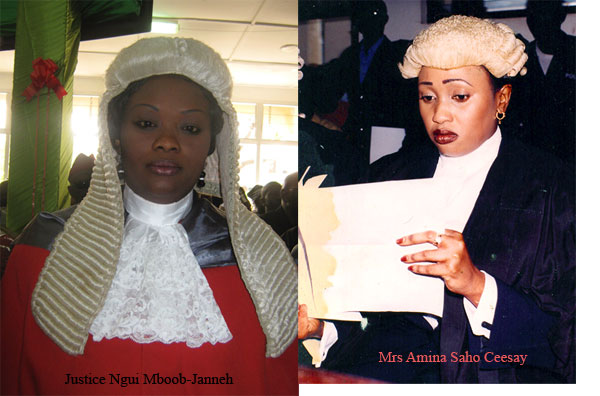 The accused persons: Justice Ngui Mboob Janneh, Justice Amina Saho Ceesay, Justice Saffiatou Njie (said to be out of the jurisdiction), Haruna Jaiteh, ex-Judicial Secretary and Alhagie LS Sonko ex-bailiff of the high court, are all standing trial on charges ranging from neglect of official duty, to stealing by public officer, aiding and abetting a pulic officer to steal, economic crime and forgery.

When the trial resumed, state prosecutor NB Jones told the court that they were applying for a short adjournment to regularise certain arrangements and correspondence, as they were yet to receive directives.

Lamin , one of the defence counsels, told the court that he was not objecting to the prosecution's application for an adjournment, but added: "We have to determine this case and resolve the matter as soon as possible. I will be objecting to any further adjournment in this case."

Counsel Lamin Ceesay also told the court that the case had been adjourned on several occasions, and little progress had been made after months of adjournments.

Justice Jobarteh then urged both parties to work collectively to ensure a speedy trial.

It would be recalled that three senior judicial officials namely, Justice Amina Saho-Ceesay, Justice Ngui Mboob-Janneh and Haruna Jaiteh Judicial Secretary, were first arraigned on 2nd December 2009 before Magistrate Emmanuel Nkea of the Banjul Magistrates' Court, charged with stealing by clerk or servant.

Justice Amina Saho-Ceesay, who was granted bail in the sum of D4 million, was alleged to have stolen D2 million (two million dalasi) and US$1000 between the year 2005 and 2009, at the Sheriff Division of the High Court.

Haruna Jaiteh, the ex-Judicial Secretary, was alleged of stealing D1, 017,000 between the year 2005 and 2009, at the Sheriff Division. He was granted bail in the sum of D500, 000 with two Gambian sureties, who must sign a bail bond of D500, 000 each and one of whom should be in possession of a landed property within the Greater Banjul Area.

The other defence counsels are Combeh Gaye Cooker and H. Gaye.