The economic crime case involving the former cashier of the Gambia Ports Authority (GPA), Jahou Jammeh, could not proceed recently at the Special Criminal Court in Banjul before Justice Emmanuel Nkea.

It could not proceed on the grounds that the prosecution’s last witness was absent. When the case was called, the state counsel applied for an adjournment because his last witness was not in court, and his application was granted.

The case was then adjourned till 21 November 2013. 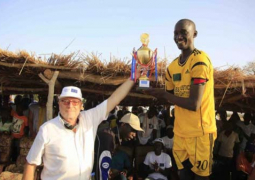 Adherence to good advice is important