The European Union funded access to justice and legal education project was yesterday launched at the Governor’s office in Brikama in the West Coast Region.

The goal of the campaign is to enhance access to justice through civic and legal education and provision of information on available justice mechanisms.

The specific objectives are to promote public awareness on civic rights and duties; promote awareness on the obligations of law enforcement agencies; disseminate knowledge and enhance confidence in the tripartite justice system.

The campaign, which is being piloted in Brikama in the West Coast Region, Kwinella in the Lower River Region and Kurau Arfang village in the Upper River Region, targets alkalolou, chiefs, imams, women, community leaders, youth kafos, and law enforcement agencies.

These activities would be conducted by the NCCE as the primary implementer in partnership with the National Agency for Legal Aid, Female Lawyers Association-The Gambia and the Alternative Dispute Resolution Secretariat.

Speaking at the ceremony, Musa Amoul Nyassi, deputy Governor of the West Coast Region, said the campaign would use a multi-facilitated media approach to educate the Gambian public, particularly those in the rural areas, on how to access and use the various means of resolving their disputes with the assistance of not only government agencies such as the magistrates and high courts, but also the district tribunals.

They are grateful to the EU Delegation to The Gambia for financing and the technical support to the programme, which fulfilled the need in support of greater rule of law and access to justice by all Gambians, he said.

They also promised to cooperate with and lend full support to the EU-Gambia cooperation and the access to justice project, he added.

He thanked the government for giving justice the lion’s share of the endeavour as well as its due.

Shelley Liberto, team leader of EU funding, said the project had been working on the awareness campaign since its inception in November 2014.

He said the main objective is to alert the public on how to approach the tripartite system of justice in The Gambia, a complex system to settle specific dispute and to obtain a peaceful and amicable resolution.

He pointed out that the frontline implementation of the campaign was an agency of the Gambian government; the primary agent of which is the National Council for Civic Education.

“It is NCCE who has been the focus of coordination of the other implementers, entities, services and media information to get the word out to the Gambian public as how to use existing resources to settle disputes,” he said.

Also speaking on the occasion, Lamin Sanneh, permanent secretary at the Ministry of Regional Government and Lands,said the objective of the campaign is to make justice accessible to especially the common man, who may not have the means to apply for justice, or know his or her right to seek for justice.

He said the multi-facilitated campaign, which would target community leaders have come at a time when the Gambia government through the Ministry of Lands and Regional Government is embarking on a massive restructuring of local administration within the territory.

He disclosed that recently his ministry has amended the Local Government Act 2002 which was passed by the National Assembly for the establishment of a national conference of governors and mayors.

He thanked the organisers and the EU delegates for funding such initiatives and creating awareness in the people, especially those at the community level. 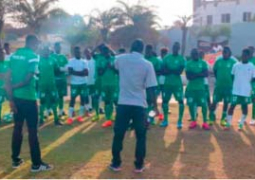