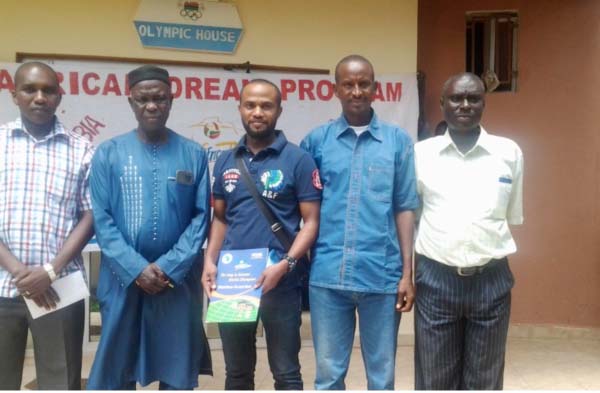 Mr Mamadou Lamine BA, an envoy from the Confederation of Africa Volleyball (CAVB), on Monday visited the president of Gambia National Olympic Committee (GNOC), Momodou Dibba, at the Olympic House.

Mr BA, who is on a weeklong inspection tour of the African Dream Project in The Gambia, was accompanied to the GNOC office by executive committee members of the Gambia Volleyball Federation, headed by its president, Yunusa Barry.

Receiving the delegation, GNOC President Momodou Dibba, reiterated his continuous support to Gambia Volleyball Federation (GVBF).He urged GVBF to put more efforts and preparedness in the implementation of the project.

“I am aware of the progress undertaken at the volleyball federation and I am ready to support in all sector,” he said.

“The Gambia beach volleyball team is on course to the Rio Olympic qualifications and we hope to see the team in Brazil next year.I can assure you of GNOC’s fullest support to the Olympic team,” the GNOC president told the delegation.

The CAVB inspector, Mamadou Lamine BA, expressed his appreciation of the support the GNOC is rendering in the development of volleyball in The Gambia.

“I am quite aware of the financial and technical support the GNOC is offering to the Gambia Volleyball Federation which was demonstrated by the recent performance of Gambia national volleyball teams in international competitions including RIO 2016 Olympic Qualifiers,” Mr BA said.

He commended GVBF for the smooth implementation of the African Dream Project in The Gambia.

“I am impressed with the commitment from GVBF, and I think this will open an era of triumph for The Gambia in years to come,” the CAVB envoy said.

The Africa Dream Project started in The Gambia in December 2014 but was officially launched in February 2015.The 4-year project, a flagship initiative of FIVB president Dr Ary S. Graca is meant for volleyball development in Africa.

Under the project, four centres are set up across the country: Banjul, Serekunda East, Brikama and Farafenni.