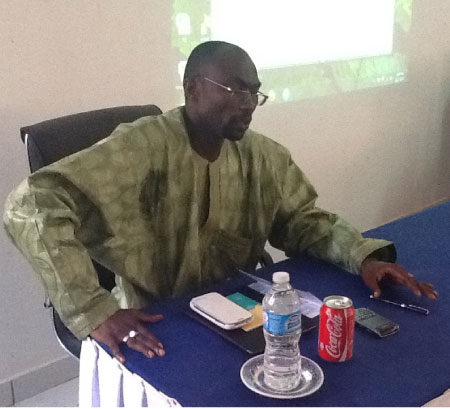 Hello and a warm welcome to another edition of the environment, your weekly column that brings you environmental issues to the lime light.

In our today edition we brought you a presentation done by Mr. Pa Ousman Jarjue, Director and UNFCCC Focal Point, Department of Water Resources in The Gambia on politics of climate change.

In his presentation Tuesday at at a one-day sensitization forum for journalists at TANGO in Kanifing, Jarju described the two policy documents on climate change, the various institutions involved in climate change policy development, the Financing of the implementation of the policy decisions and the main climate change programmes of interest to The Gambia

Purpose is to cooperatively limit average global temperature increases and the resulting climate change, and to cope with whatever impacts were, by then, inevitable.

In 1995, countries launched negotiations to strengthen the global response to climate change,

In December 1997, the Kyoto Protocol was adopted in the city of Kyoto in Japan

The Protocol’s first commitment period started in 2008 and ends in 2012.

In Doha, governments of the Parties to the Kyoto Protocol decided on an Eight Year Second Commitment Period starting 1 January 2013.

Parties (countries) are divided into three main groups according to differing commitments:

Annex I Parties include the industrialized countries that were members of the OECD (Organisation for Economic Co-operation and Development) in 1992, plus countries with economies in transition (the EIT Parties).

Annex II Parties consist of the OECD members of Annex I, but not the EIT Parties. They are required to provide financial resources to enable developing countries to undertake emission reduction activities under the Convention and to help them adapt to adverse effects of climate change. In addition, they have to “take all practicable steps” to promote the development and transfer of environmentally friendly technologies to EIT Parties and developing countries. Funding provided by Annex II Parties is channeled mostly through the Convention’s financial mechanism.

Non-Annex I Parties are mostly developing countries.. The 49 Parties classified as least developed countries (LDCs) by the United Nations are given special consideration under the Convention on account of their limited capacity to respond to climate change and adapt to its adverse effects. Parties are urged to take full account of the special situation of LDCs when considering funding and technology-transfer activities.

The COP reviews the implementation of the Convention, the Kyoto Protocol and any other legal instruments

The COP adopts and takes decisions necessary for implementation of the Convention, including institutional and administrative arrangements.

The Bureau is elected from representatives of Parties nominated by each of the five United Nations regional groups and Small Island Developing States (SIDS).

The Bureau consists of the COP President, Chair of SBSTA, Chair of SBI , 7 Vice Presidents and a Rapporteur. These a nominated and elected by the different Regional Groups (Africa, Asia-Pacific, Eastern Europe, Western Europe, GRULAC and SIDs)

The Subsidiary Body for Scientific and Technological Advice (SBSTA) supports the work of the COP and the CMP through the provision of timely information and advice on scientific and technological matters as they relate to the Convention or its Kyoto Protocol.

The Subsidiary Body for Implementation (SBI) supports the work of the COP and the CMP through the assessment and review of the effective implementation of the Convention and its Kyoto Protocol.

The AWG-LCA - Ad hoc Working Group on Long-term Cooperative Action under the Convention (AWG-LCA) was established to conduct a comprehensive process to enable the full, effective and sustained implementation of the Convention through long-term cooperative action, now, up to and beyond 2012.

The Ad Hoc Working Group on the Durban Platform for Enhanced Action (ADP) is established to develop a protocol, another legal instrument or an agreed outcome with legal force under the Convention applicable to all Parties and to come into effect and be implemented from 2020.

The Executive Board of the clean development mechanism (CDM) supervises the Kyoto Protocol’s CDM and it is the ultimate point of contact for CDM project participants for the registration of projects and the issuance of certified emission reductions.

The Joint Implementation Supervisory Committee (JISC) supervises the verification procedure for submitted projects to confirm that the ensuing reductions of emissions by sources or enhancements of anthropogenic removals by sinks meet the relevant requirements of Article 6 of the Kyoto Protocol and the joint implementation guidelines.

The Technology Executive Committee (TEC) is mandated to facilitate the effective implementation of the Technology Mechanism.

The Adaptation Committee (AC) is to promote the implementation of enhanced action on adaptation in a coherent manner under the Convention.

The Least Developed Countries Expert Group (LEG) is established with the objective of supporting the preparation and implementation strategies of national adaptation programmes of action and to serve as advisory body to the LDCs on adaptation issues.

The Secretariat of the UNFCCC provides organizational support and technical expertise to the UNFCCC negotiations and institutions and facilitates the flow of authoritative information on the implementation of the Convention and its Kyoto Protocol.

The Intergovernmental Panel on Climate Change (IPCC) is a scientific body that reviews and assesses, at regular intervals, the most recent scientific, technical and socioeconomic information produced worldwide and relevant to the understanding of climate change.

THE CLIMATE CHANGE
The Global Environment Facility (GEF) is an operational entity of the financial mechanism of the Convention that provides financial support to the activities and projects of developing country Parties.

The Green Climate Fund (GCF) is the operating entity of the financial mechanism of the Convention and is accountable to and functions under the guidance of the COP.

The Trust Fund is administered directly by the UNFCCC Secretariat

The LDC Fund is established to support the preparation and implementation of the NAPAs and other activities such as strengthening the institutional infrastructure.

The Adaptation Fund is established to finance concrete adaptation projects and programmes in developing country Parties. It is financed by a 2 per cent share of the proceeds from certified emission reductions.