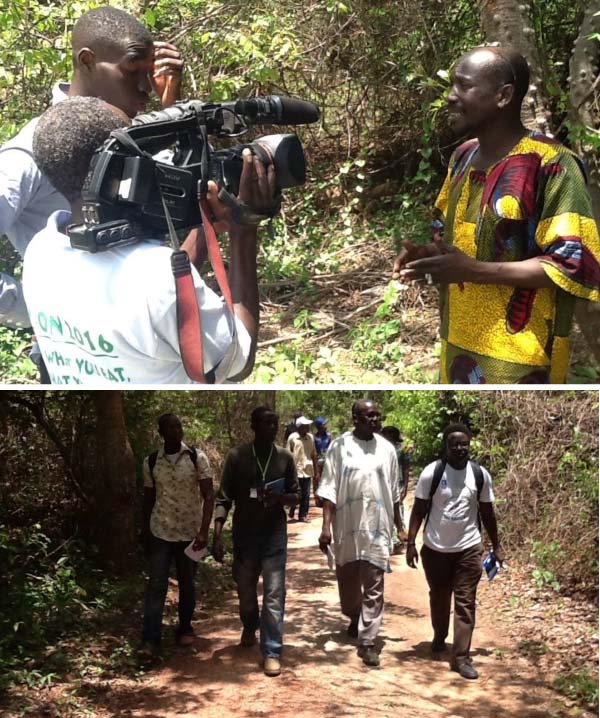 Hello and a warm welcome to yet another edition of the environment, your weekly column that brings environmental issues to the lime light.

In our today’s edition we look at the various efforts made by local initiatives and grassroots organizations to the prevention and protection of the environment.

At the weekend about thirty (30) journalists from Biodiversity Action Journalists-The Gambia led by the staff of Department of Parks and Wildlife Management on 24 and 25 July 2014, embarked on a two-day national visit to national parks aimed at obtaining first-hand information about existing parks in the country.

The first place visited was Tanji Bird Reserve in the Kombo North, West Coast Region, were members of BAJ-Gambia were briefed by staff of the department on the ground on the history and activities of the park including benefits, challenges and the way forward.

Mamadou Edrisa Njie, Director of Programme for BAJ-Gambia, in his introduction remark, stated that the visit was the final activity of the UNDP- GEF financed programme, which came after series ofprogrammes implemented across the country as stated in the project document, thus encourage public participation in environmental protection.

Highlighting some of the programmes implemented, he said training of news editors and launching of BAJ-Gambia magazine were key in mainstreaming environmental reporting in the local newspapers as well as organizing radio programmes for community radios and FMs.

He thanked and commended the UNDP-GEF Small Grant Programme for providing the strategic support to implementing such programmes and activities.

Abdou Rahman Sallah, Executive Director of BAJ-Gambia, said the field trip was supported by UNDP-GEF Small Grant Programme through a project on environmental protection and mitigation.

He reiterated that they had implemented series ofprogrammes from last year to date all geared towards enhancing the understanding of environmental reporters on the country’s biological and natural resources, which has both national and international importance.

He explained that BAJ-Gambia is a coalition of environmental journalists drawn from the print, electronic media as well as bloggers and community radios across the country.

Director Sallah further pointed out that the environment is dwelling rapidly due to anthropogenic activities towards the environment such as cutting down of trees without replacement, bush burning, and poaching.

He noted that the role of journalists in this case is to report the dangers of environmental damages and create awareness of the public on environmental protection and conservation; thus encourage public participation in the crusade.

“As human beings I believe we have contributed either directly or indirectly towards environmental problems and therefore it’s our responsibility as human beings to restore, promote, protect and conserve the country’s natural resources for posterity,” he emphasised.

According to him, the principal objective of his organization is to advocate for sustainable use of the biological and natural resources to ensure its availability at all times.

“It is not our mandate to stop or prosecute environmental violators but we do have duty to inform the general public about the dangers of environmental damages and implications if one violate the environmental laws of the country,” he added.

He said: “We call on all and sundry, especially on those directly involving in environmental affairs to observe the laws of the country, for example fishermen, to use the recommended fishing gears to avoid catching juvenile fishes that may not be useful to them.”

Mr Sallah went further to speak at length on the importance of the visit as it would prove to the journalists that what they have heard about the national parks was not a fiction but the truth.

He thanked and commended the parks and wildlife management, forestry department, fisheries, water resources and various newspapers and radios for their continued support to their crusade in protecting the environment.

Sutay Sanneh, Tanji Bird Reserve Park manager, said the reserve was established since 1993 and has a total land area of six hundred and twelve (612) hectares, adding that the reserve is in the territory of Brufut but owned by the Government of The Gambia.

According to him, the reserve has a co-management system with all the communities around the protected area, namely Brufut (Ghana town), Tanji, Madiana among other surrounding villages.

He described the park as very important entity to the economic development of both the community and for the country, as the place is having several species of bird, as well as eco-camp, which he said is among the best of reserves in the sub-region.

Abdoulie Saho, BAJ-Gambia’s board chairperson, who is also a staff at the Department of Parks and Wildlife Management, said as a department responsible for managing all parks in the country, initiatives are directed from the Banjul Declaration.

He said in doing this they established Site Management Committee (SMC) at every park in the country that would work hand in hand with the parks departmental staff to ensure protected areas are always in good shape.

He stressed that Tanji Park is a protected area that had suffered so many threats such as dumping and erosion and other environmental exploitations.

He emphasised the need for all hands on deck to protect and preserve the remaining resources and come up with initiatives such as BAJ-Gambia to promote environmental endeavours in the country.

As part of the visit, the team continued to Abuko Nature Reserve, where members had the opportunity to see hyenas, baboons, cheetah among other animal species for the first time in their lives, as they were told by experts that cheetah is the world fastest animal that runs 70 miles per hour.

Later in the day the team proceeded to Kiang West National Park in Dumbuto village Lower River Region some one hundred and thirty kilometres from the capital city of Banjul, where they had a night stop.