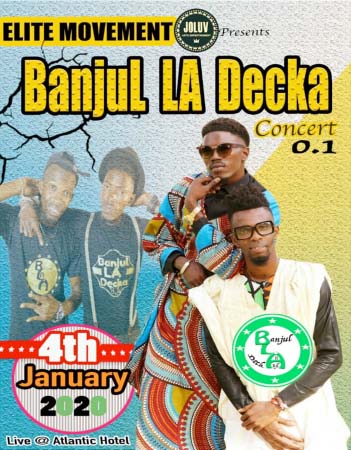 Banjul La Decka concert, a brand initiated by musician Sora G4 of Elite Movement and Joluv Arts Entertainment is set to hold a concert at Atlantic hotel in Banjul on 4 January 2020.

The idea is conceived, embraced and enhanced by chief executive officer of Joluv Arts Entertainment, Saul Sowe. Elite movement will be the main icon of the event which will also feature Gambia’s finest artists.

Speaking in an interview with The Point Entertainment and Lifestyle ahead of the event, Sora G4 explained that they signed with Joluv Arts in 2018, describing the record label as the finest in The Gambia.

He urged Gambians to come out in their numbers on the day and support their Gambian artists saying they will give fans the best performance.

He revealed that him and Chipa are working on an upcoming single called Banjul La Decka and another single with Ahmed Chun the man with the golden voice and called on Gambians to watch out for the song which will big.

D. Jobz, Operations Manager Joluv Arts Entertainment thanked Saul Sowe, Sora G4 and Chipa for their good work, saying the record label has a bond which holds and makes their work easier as well as make the artists record freely without any stress.

According to him, CEO Sowe has given them all incentives that proper work requires adding that Joluv Arts Entertainment has been in existence since the early 1990s endorsing the likes of Maslabi, Mass Lowe, among other artists within and outside The Gambia.

He described Joluv Arts Entertainment as the biggest and most consistent record label for music business in The Gambia with a breakthrough that no other record label has.

“We are open to everybody because we understand the genesis of music business as well as the realities surrounding careers of artists”, he stated.

D. Jobz also said that the event will be huge because it is young people taking ownership of where they belong.

He encouraged Gambians to support what they own, saying: “it is high time for us to be studios in our own country before we can be studios outside. The only way we can support our artist is by attending the events and being lucrative to them.”

In conclusion he appealed to Gambians to allocate for our artists and not compare them to foreign artists.