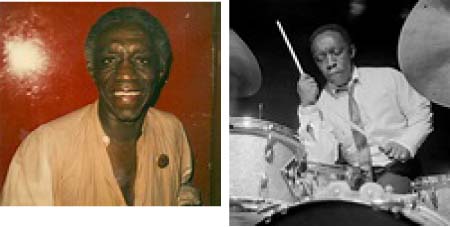 As we continue our literary journey through jazz, let us take a look at the “Drum” and its use in jazz music. The drum is a member of the percussion group of jazz instruments, technically classified as the “memranophones”. Drums consist of at least one membrane called the drumhead or drum skin that is stretched tightly over a shell and struck either directly with the player’s hands or with a drum stick to produce sound. A drum kit or drum set (trap set) is a collection of drums, cymbals and other percussion instruments such as cowbells, woodblocks, triangles, chimes or tambourines arranged for convenient playing by a single person.

Jazz drumming is the art of playing percussion-(mainly the drum set,) which includes a variety of drums and cymbals. Its styles range from the Dixieland jazz of the 1910’s, to the jazz-rock fusion of the 70’s and the Latin jazz of the 80’s.The techniques and instrumentation of jazz drumming has evolved over several periods, greatly influenced by jazz itself and the individual drummers within it. Stylistically, the aspect of performance was shaped by its starting place-New Orleans, as well as numerous other regions in the world, including parts of the United States, the Caribbean and Africa. Each period of the evolution of jazz, had its own rhythmic style which developed along with the music through the 20th Century. One tendency that emerged over time was the gradual ‘freeing ‘of the beat. Other styles persisted in later periods, but the borders between these periods are unclear, partly because no one style completely replaced others, and because of the cross influences between styles.

One of the biggest names in jazz drumming is a guy called Art Blakey. Along with Kenny Clark and Max Roach, he was one of the inventors of the modern bebop style of drumming. For more than thirty years, his band-‘Art Blakey and the Jazz Messengers’ was at the forefront of jazz drumming and included young musicians who went on to become prominent names in jazz. His birth name is Arthur Blakey, later known as Abdullah Ibn Buhaina after his conversation to Islam in the late 40’s during a visit to West Africa. He was born in Pittsburg, Pennsylvania on October 11th 1919, and started playing the piano as a teenager. He later taught himself how to play the drums, copying the swing styles of Chick Webb, Sid Catlett and Ray Banduc.In 1942; he joined Mary Lou Williams as a drummer and played at an engagement in New York. Prior to this, between 1939 and 1942, he toured with the Fletcher Henderson orchestra and with Billy Eckstein’s band between 1944 and 1947. He was associated with the modern jazz movement, along with his fellow band members, Miles Davis, Dexter Gordon and others.

In 1947, Blakey put together a group of musicians called “the Messengers” and recorded an octet called “the Jazz Messengers”. In the early 1950’s he performed with such musicians as Charlie Parker, Miles Davis, Clifford Brown and Horace Silver who was his kindred and shared the same musical spirit at that time. In 1953, Blakey and Silver formed a cooperative group with Hank Mobley and Kenny Dorham retaining the name- Jazz Messengers, and in 1954 they recorded the album “a Night at Birdland”. Silver left the band in 1956 to start his own group, and Blakey became the leader of the “Messengers” which became the springboard for young musicians such as Donald Byrd, Lee Morgan, Wayne Shorter, Freddie Hubbard, Wynton Marsalis, Chuck Mangione and others. From his earliest recording session with Billy Eckstine and Thelonius Monk in 1947, Blakey exuded power and originality. Although he discouraged comparison of his own music with African drumming, he adopted several African styles and devices after his visit to Africa, including tapping the side of the drum, and using his elbow on the tom-tom to alter the high pitch. Blakey was known as a loud and domineering drummer who also listened and responded to his soloist. His contribution to jazz as discoverer and molder of young talent over three decades was no less significant than his very considerable innovations on his instruments.

Up to the 1960’s, Art also recorded as a sideman with many other musicians such as Jimmy Smith, Cannonball Adderley, Grant Green, Lee Morgan and Hank Mobley amongst many others. Thereafter, he mainly concentrated on his work as a leader. The Messengers originated in a series of groups led by Blakey and Silver, but the name was not used in the earlier recordings. However, the name was used by Blakey in the late 40’s playing with various musicians. In 1955, the group comprising Silver, Blakey, Mobley, Dorham and Doug Watkins, recorded the live album entitled “The Jazz Messengers at the Café Bohemia”.

The following year in 1956, Donald Byrd replaced Dorham and the group recorded the album simply called “The Jazz Messengers”. It was during this period that Silver left the band and Art became the sole leader of the group from then onwards known as “Art Blakey and the Jazz Messengers”. Between 1959 and 1961, the group featured Wayne Shorter on saxophone, Jimmy Merrith and Lee Morgan. By 1961-1964 it was now a sextet with the addition of trombonist Curtis Fuller. Shorter was the musical director of the group and his experimental inclinations pushed the band into an engagement with the 60’s “New Ting” as it was called.

Blakey would move on to record dozens of albums with a constantly changing group of jazz messengers. He had a policy of encouraging young musicians and once remarked “I’m gonna stay with the youngsters. When these get too old, I’ll get some younger ones, Keeps the mind active”. Between 1971 and 1972, he toured with jazz greats Dizzy Gillespie, Kia Windina, Sony Stitt, Thelonius Monk and Al McKibbob. In the 80’s, his band got revitalized and included the like of Wynton Marsalis, Terrence Blanchard, Donald Harrison and Kenny Garret. Blakey died in 1990 in New York City, leaving behind a vast legacy and an approach to jazz which is still the model for countless hard bop players.