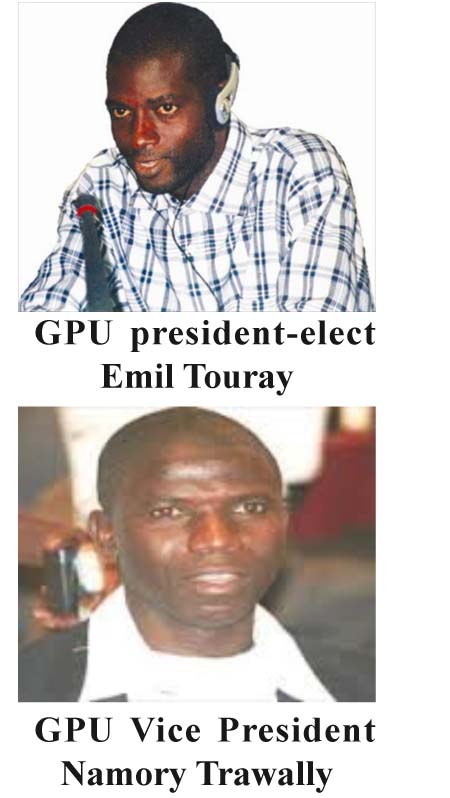 Members of the Gambia’s media fraternity Saturday overwhelmingly voted for Emil Touray to continue to serve as the president of the Gambia Press Union, GPU, for a second term of three years.

At the 7th triennial congress of the union, held at the GTMI hall in Kanifing, Mr Touray defeated his former 1st vice president, Baboucarr Ceesay, by 41: 21 votes.

The congress saw the election of Namory Trawally, a freelance journalist, as the 1st vice president after he defeated his opponent, Momodou Edrisa Njie of the News and Report magazine by 42:19 votes.

Modou Kanteh of the Daily Observer is now the 2nd vice president after he defeated Adama K. Jallow of The Point newspaper by 41:15 votes.

Lamin Jahateh of The Point newspaper was also elected unopposed as GPU treasurer.

Ida Bah of Unique FM was elected as the female co-opted member, after she defeated Halimatou Ceesay of The Point newspaper by 34: 24 votes.

The post of male co-opted member was given to Hatab Fadera, formerly of the Daily Observer newspaper, after he defeated Bakary Ceesay of The Voice newspaper by 40:15 votes.

The election of the new GPU executive committee members was preceded by the presentation of the three-year financial and activity reports of the union.

This was followed by numerous comments from the general membership, who were divided about the achievements and the shortfalls of the Emil Touray-led previous executive.

The discussion was a bit chaotic as people, apparently belonging to different camps that vied for executive posts, could not agree on many issues.

At the end of the day, the two reports were neither adopted nor rejected.

Whether the congress should go ahead with the election or not, when the reports were not adopted, was a bone of contention, but the congress went ahead anyway.

Another bone of contention was who should serve as the independent electoral commissioner during the election.

Lamin Nyangado, formerly of ActionAid The Gambia, was nominated by the outgoing executive to serve as the electoral commissioner, but some people objected, questioning his impartiality as he was allegedly “close” to some of the incumbent GPU executive members.

He finally presided over the election.

The elected president, Mr Touray, promised to continue his work in the interest of Gambia Press Union and its members.

He said he has taken note of all the comments made during the congress, both positive and negative, and will work towards correcting some of the pitfalls during his previous tenure.

Mr Touray argued that to say his previous executive committee achieved nothing or failed amounted to “distortion of the facts.”

He said the gains and successes registered by his previous executive were “far more than what most of the past executive committees of the GPU registered.”

On the work plan for his second and final tenure, Mr Touray said he would collaborative with his new GPU executive members to continue the development trend he started with his past executive.