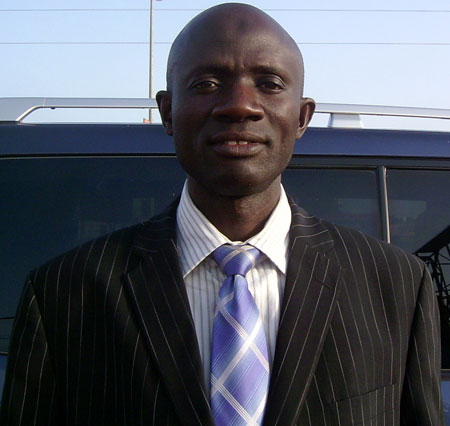 Sports minister Alieu Jammeh yesterday called Gambian sports associations affiliated with the Gambia National Olympics Committee, GNOC, to announce that the government would be compelled to take its role as the regulator of sports in the country, if the sports associations failed to work as one unit as has been agreed over the GNOC political matters last year, and if there are any ramifications that would be blamed on people who are not prepared to work in the interest of the country.

According to the minister, a simmering dispute similar to the one that split the Olympic family in the 2010 elective congress is gradually rearing its ugly head again, and it has to be nipped in the bud for any meaningful development is to be achieved.

“I have to emphasize that if we as the sports leaders cannot work together then we must be prepared to give way to people who are ready to function as one big sports family. The bickering must stop,  and all of us should focus on promoting the interest and development of the athlete on whose behalf we all claim to be working for,” he said.

Minister Jammeh further clarified that following the lack of agreement between the feuding parties in the GNOC, amid allegations that the Ministry is backing one side, he had set up a sports tribunal to independently ascertain the facts.

“But in the interest of reconciliation, unity and compatriotism, and with the blessing of the government we decided not to implement the recommendations of the Sports tribunal and instead convened all parties to sign a reconciliation pact through a six-point agreement. I want to make it clear that the six-point agreement would be implemented as agreed,’’ Mr Jammeh said.

The minister accordingly called on the sports family to ensure that they work out an effective way of working together to the satisfaction of both sides to protect the interest of the athlete.

‘We as government shall always be there to facilitate, through funding where necessary, all endeavors to ensure that excellence is attained in our sports. But we must have to work with one objective to get there,’’ he concluded.

The minister’s actions came on the heels of fresh disagreements between the GNOC affiliated associations over the eligibility and conduct of the process leading to the March 23 elective congress.

Meanwhile, the decision  by the ministry to implement the six-point agreement is being received with great interest on both sides and onlookers of the GNOC political divide, not least because one of the points called for the  succession of the GNOC leadership from the present leadership  to a younger generation.

With the elections scheduled for March 23, it is widely believed that the implementation of this point or the lack of it could determine the success or otherwise of all efforts to end this saga.

In the interest of all we reproduce the full content of the six-point agreement.

The road map calls for: (1) all stakeholders to accept the totality and validity of the report of the National Sports Tribunal and that the implementation of the recommendation of the said report or the lack of it is discretionary; (2)ensure the withdrawal by the GNOC of the court proceedings in the High Court against the National Sports Tribunal, the Sports Council, the Ministry of Sports and the Minister of Youth and Sports; (3) the GNOC to report to the IOC that the difficult situation that existed between the GNOC and the Ministry of Sports has been addressed and resolved, and that relations are cordial, so as to seal Gambia from any possible sanctions by the IOC; (4)bring all conflicting parties in the GNOC presidential elections of February 2011 to a negotiating table for  reconciliation; (5) begin a collective and coordinated six months reform programme for sports development that will ensure clarity of responsibilities, relationships and operational framework for all actors in sports in the country and finally, (6) work out a transitional programme to ensure a smooth and credible transfer of positions from the current crop of sports administrators to a new generation of leaders.

Setback in Bun and co trial