The ICC and Bashir: Who is to blame?

No sooner had the International Criminal Court (ICC) indicted ’s leader Omar al-Bashir for crimes against humanity than his loyalists cried out against the action, saying that it would jeopardise the peace process.

But that is just one objection. The other objection is that the ICC is on a witch hunt of African leaders. A more ridiculous objection we have never heard.

Charles Taylor, the former president of who was convicted last month to 50 years in jail for his role in civil war in , is notorious for his terrible acts as a former rebel leader, and as former president.

His arrest and trial was justified as he was given the chance to establish his innocence. For the many people whose lives ruined, having him tried and jailed for his atrocities is not punishment, but justice.

The Sudanese conflict is on record as the longest armed conflict on the continent. And the humanitarian challenge it has posed ever since its outbreak is unimaginable.

Millions have lost their lives and many more have been displaced, condemned permanently to a life of tragedy and misery. And al-Bashir is seen as a key perpetrator of this tragedy.

Like , he should go to the ICC to clear himself. Why the fear, if he knows that his hands are clean?

What has happened to and currently happening to al-Bashir is not an anti-African leaders campaign. Even if it is, then these leaders have given the prosecutor cause for them to have them on trial.

If they had practiced good governance, with respect for human rights, transparency and accountability, then they would not have been going through this ordeal.

This then should serve as a lesson to other incumbent leaders that they cannot misgovern their people, plunge them into civil wars and degradation, and hope to get away with it.

While we do not want to be seen as passing judgment, it is our contention that what has happened to and currently happening to al-Bashir is a positive development, in the sense that the few remaining dictators on the continent will have to learn; otherwise, the long arm of justice will slowly but surely catch up with them someday.

The Mo Ibrahim Foundation has rewarded an African leader who served his people well.

If we have to go by the dictum that for every action there is an equal and opposite reaction, then al-Bashir is only about to reap what he has sown.

“Injustice anywhere is a threat to justice everywhere.” 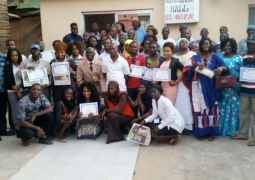