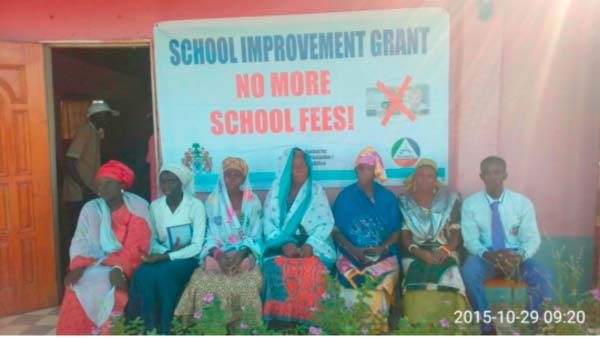 The task team from the Education For All Network (EFA Network) has held series of sensitization and engagements with stakeholders in the education sector within North Bank Region on the introduction of School Improvement Grant for senior secondary schools.

The forums were held in Farafenni, Kerewan and Essau in the North Bank Region (NBR). The advocacy campaign was funded by German BACKUP Initiative/ Education in Africa and Gambia Government.

He called on stakeholders in the education sector to be vigilant in disseminating messages to enhance education for all.

In his remarks, Essa Sowe, deputy executive secretary of Gambia Teachers Union and board member for Education For All Network, noted that “government is fully committed to education for all”, citing the introduction of School Improvement Grant from lower basic, upper basic and senior secondary schools.

The initiative would support access to education, retention and completion, as well as reduce burden of school cost and by extension enhance the country human resource development, he said.

Mr Sowe noted that the role of parents is to ensure that no child is withdrawn from school for early marriage and farm work as well as to ensure children take education seriously.

Batuwo Jaiteh, secretary general of Gambia Conference of Principals for Upper Basic Schools, in his address, said the development of School Improvement Grant calls for concerted efforts and involvement of school management committees, to enhance good governance and accountability of school resources.

The grant is to improve teaching and learning in schools, he said, while calling on head teachers to be vigilant to prudently use the grant for better planning.

Furthermore, he noted, the Ministry of Basic and Secondary Education has abolished all levies in schools since September 2013 for lower basic schools, 2014 for Upper Basic schools and September 2015 for senior secondary schools.

Previous:
Court dismisses case against Education Ministry, Attorney General
Next:
WHY IS THE RATE OF MISCARRIAGE IS VERY HIGH IN THE GAMBIA