How the Gambia Army was founded 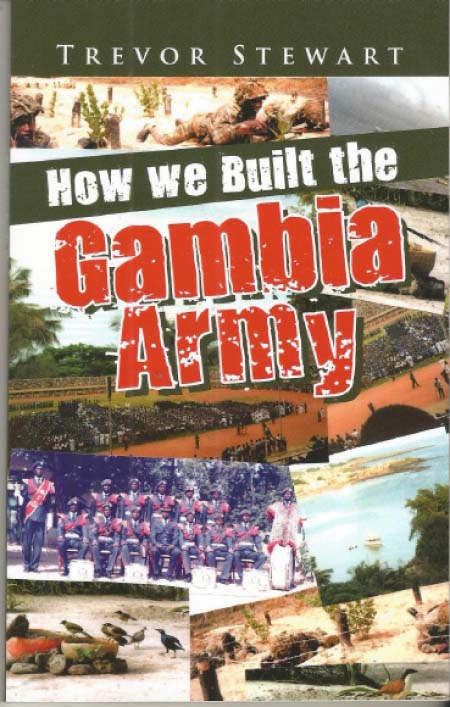 In early 1984, 33 years ago the PPP regime of President Alhagi Sir Dawda Jawara sought the support of the British to help star a national army. Since the dissolution of the Royal West African Frontier Force in 1958, our country did not get a standing army; our security was in the hands of a dozen Field Force paras, our own natural disposition for peace in God.

Following Jawara’s lucky escape from the aborted insurrection of Kukoi Samba Sanyang in July 1981 in which over 1000 Gambians died, Jawara was convinced by circumstance and not by inclination to have a standing army. The way this new army was selected, trained, kitted is the topic of this very revealing book by Trevor Stewart, one of the British Army Training Team (BATT) members who was brought to The Gambia to start the new army.

On page 14, the author reminds readers of the Terms of Reference of the BATT when they arrived in Banjul in early 1984: ‘the administration and equipment management’ of the new army; and to ‘train all Gambian (soldiers), clerical staff’ for the new army. In addition, on page 17, he explains that he was also tasked start a recruiting campaign for the new army in The Gambia.

The author reveals that from the start, he was told that the new Gambian army should have a structure ‘on the lines as an extended British infantry battalion with supporting forces’. He therefore developed a six company structure for the Gambian army: confederal, Rifle/ceremony, Rifle one, Rifle two, HQ and Marine Unit. Then he arranged for a 20 minutes sensitization programme on Radio Gambia inviting potential recruits to come.

And on page 29, we read that hundreds of young men came to the recruiting centers which were decentralized to the villages, so that each interested Gambian had an opportunity to meet the selection team .The author and his team were overwhelmed, especially as all of them had school certificates and most were physically fit. So how does he select? He painted a scenario like ‘You are at a festival in your village and awaiting the arrival of a VIP. A number of vehicles arrived, and out of one of them steps the president, who is greeted by village elders. Then, quick as a flash, someone from within the crowd steps forward wielding a machete, hitting the president with it, and knocking him to the ground bleeding. The perpetrator of the crime manages to run off into the bush! What do you do? (page 31). The answers given were used to help in selecting the first Gambian soldiers in 1984! He admits further in the book that some of the answers he got such as one who said he would first carry out first aid on the president, make an assessment of the situation, gather some able-bodied men, leave some of them to look after the president, and take some of the others in search of the perpetrators were unnerving but all the same useful in the selection of recruits.

Some of his best early recruits were second lieutenants Gomez, Senghore, Njie, Gaye, Faye, Johnson and Davies who were immediately sent for further training at the esteemed Fort Bragg, Fort Worth etc and went onto to hold senior positions in the army until 1994.

That was the year when the Gambian army plotted and remove Jawara their C-I-C , and founder. The rest is history, we say.

This is a rare book on the early history of the Gambia national army and is interesting read which I recommend to students of Gambian military history and military commanders past and present.