Education for All Network (EFANet), in collaboration with other relevant stakeholders, recently held a daylong national sensitization forum on school improvement grant at the Paradise Suites Hotel in Kololi.

The forum was meant for stakeholders in education to gather and discuss education policy pronouncement with a particular focus on school grant, access to education, opportunities and challenges as well as guidelines of the school grant policy being implemented and the role and responsibilities of stakeholders.

In her welcoming speech, EFANet Board chair Zono Jammeh said the grant of one hundred dalasi per child for children in the Lower Basic School would prevent head teachers from making other levies on them, which will gradually lead to free basic education for all Gambian children as enshrined in the Gambia Constitution.

She applauded the Ministry of Basic and Secondary Education for coming up with the laudable initiative in that they have not only ensured that education is brought to the doorstep of every Gambian child but that all levies are also abolished.

“We are all aware that the hidden cost in education had from time immemorial acted as a deterrent to some members of our communities not going to school,” she said.

The availability of the school grant will enable administrations to develop their schools in line with their school development plans, she added.

She noted that the abolishment of levies in lower basic schools will enable them meet the second EFA  goal which states that by 2015 all children, particularly girl child, in difficult circumstance and those belong to ethnic minorities have access to complete free and compulsory primary education of good quality.

She further asserted that for the abolishment of levies to be truly established, teachers, parents and schoolchildren all have a role to play in ensuring that all children within the country develop their abilities to the fullest.

Teachers, she also noted, need to be more committed to their job of teaching the young ones who will grow up to become tomorrow adults.

She further advised parents that government taking responsibility of the education of their children does not mean they as parents do not have a stake in it.

It is the responsibility of the parents to support the school by working with the administration, visiting the school regularly and playing a more active role in school affair.

For his part, the permanent secretary of the Ministry of Basic and Secondary Education, Babuccarr Bouye, reiterated on a point made several times on the introduction of school improvement grant.

He also seized the opportunity to inform teachers that the rationale behind the introduction of school improvement grant is not meant to reduce their earnings.

Mr Bouye said that as far as the law is concerned, it is the school fees they consider as legal, but it has been abolished in the lower schools.

He said as far as the government and the ministry is concerned cost in school is the biggest barrier and “we must remove it”.

PS Bouye noted that the government can provide classrooms, chairs and other facilities to the doorstep of the Gambian child but there are items that need to be paid for and “those responsible don’t have the means”, which are the parents.

He thanked EFANet for their help to MoBSE for conducting the national sensitization, which is the sole responsibility of the ministry to carryout nationwide. 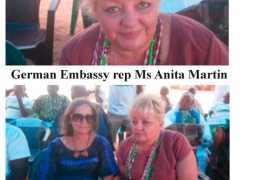