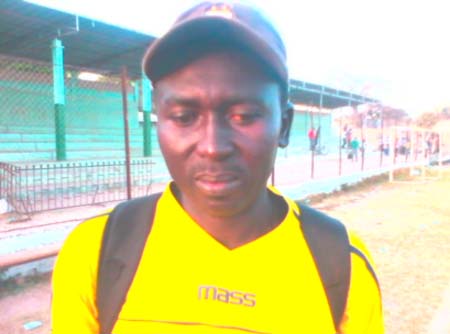 Jaine Joof, head coach of Samger FC, has challenged his strikers to step up and start banging in the goals to lift his side from the relegation zone.

Head coach Joof, who was speaking to reporters last Saturday at the Serrekunda East Mini Stadium following his side’s goalless draw with Bakau United in the week-thirteen of the Gambia Football Federation (GFF) first division league, added that a defence line that is compact with very good midfield players, “all the strikers need to do is focus in front of goal and bang in the goals”.

They are only trying to find the goals to achieve what they want (move out of the relegation zone), he noted, saying knowing that they are at the bottom they need to push harder.

“We will go back and work harder on training and put more pressure on the boys to put more concentration in front of goal,” he remarked, saying his strikers are always hesitant in front of goal.

They have been working very hard on finishing in training day in day out, he stated, saying it is left with the strikers to focus more in front of goal and produce what they have been trained to do.

“If you do not focus on the opponents’ defence, you are always bound to go home without scoring a goal,” he observed, saying: “It is the responsibility of the players to execute whatever they have been taught in training so the coaches would know what they are working on is paying dividend.

“It is the responsibility of the players to know that if you do not concentrate you cannot score goals or win a game,” he also said, calling on his strikers to respect training as well as what they have been taught in terms of finishing.

“If you have a team that is composed at the back with very good midfield players then the attacking force should concentrate on what they are doing so that at the end of the day the team can achieve their desire,” he said further.

Jaine Joof expressed dissatisfaction with the outcome of the game, but said he is content with the performance of his players during the second half.

“It was a game we showed a positive approach in realizing that we are at the bottom,” he noted, adding: “We told the boys only the 3 points can give us what we want.”

They gave Bakau United the maximum respect knowing that they are a difficult team to play, he said, adding that the game was balanced in the first period as both teams were playing to penetrate each other’s half.

In the second period they brought in fresh legs, thus they were very creative by creating a lot of chances but were just unfortunate to find the back of the net.

It was a tough game as Bakau United are not far away from them on the league table standing as well as considering that Bakau United were just from losing their FA Cup game to second division side Blue Star FC, the Samger gaffer stated.

Considering that his team lost their opening game of the second round fixture and then went on to draw the second, it meant they can bounce back to winning ways, he concluded.

Amadou Demba, Bakau United coach, described the game as fair. The expectation was very high prior to the game, he stated, adding that during the first half his side dominated possession but unfortunately the chances created were not taken by the players.

The performance of the boys was good both technically and tactically, he pointed out, saying the only thing lacking was the finishing.

They work very hard on finishing daily and during training sometimes a single player scores more than five goals in a day but when you come to the real game situation it is a different scenario, he highlighted.

They are working towards they target, which is third position in the league,  he went on while saying, in conclusion, that they have played two games during the second round and have not lost.