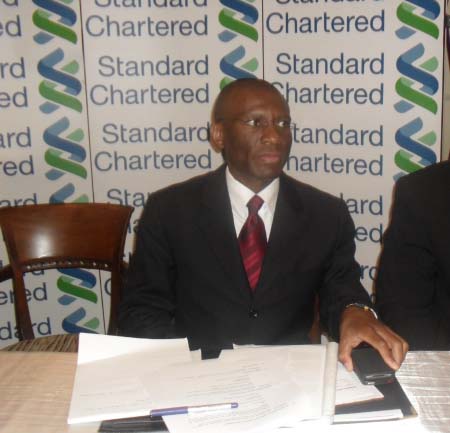 Good tidings for Standard Chartered Bank clients as the bank, both national and international, continues to register impressive results.

The bank is poised to enter the second half of the year with high volume growth on the strength of a robust balance sheet, strong capital and ample liquidity to serve its clients as they achieve their growth aspirations.

On 6 August 2013, SCB Plc announced an increase in both underlying income and profits for the first half of 2013 with 17 markets achieving double digit income growth and 25 markets delivering income over US$50 million.

Total group income, according to a press release by the bank, was up 4 per cent to US$9.75 billion, excluding own credit adjustment, driven by growth in Consumer Banking revenue and a step-up in Q2 income in Wholesale Banking.

The Group, the press release says, has delivered a number of excellent performances in markets such as Hong Kong, “where operating profit before tax was over US$1 billion for the first time in a six month period”, as well as good performances in the Americas, UK and Europe region, and in Africa.

“Africa has achieved an impressive start to the year, with income up 16 per cent,” the bank says. “We have seen particularly strong growth in Ghana, Zambia and Kenya. We are investing across Africa – in people, in systems, in new branches.

“In the second half we will launch our new joint venture bank in Angola, giving us an onshore presence in sub-Saharan Africa’s third largest economy for the first time and we also intend to open up in Mozambique.”

The bank’s UK, Europe and Americas region plays an important role in its network, “both because of the Western corporates that we take into our footprint markets and because it connects those in our footprint to vital finance hubs in the West”. Income from this region was up 5% in the first half, it says.

India has also shown good growth in income and profits, up 10 per cent and 45 per cent respectively, the release stated.

It continues: “We have impaired goodwill in the Korea business of US$1 billion, as we indicated at the time of our pre-close market update in June.

“We are taking a number of actions to refocus the business to improve productivity and return on capital, including simplifying the operating structure and reviewing options for non-core businesses.

“We are the largest foreign investor in Korea, which remains an important part of our franchise and we are committed to offering both Consumer and Wholesale Banking in the market.”

Wholesale Banking performance shows great resilience, going up 2 per cent and client income, which represents over 80 per cent of Wholesale Banking income, was up 6 per cent, the release stated, adding that Consumer Banking, put together, grew income for the first half at 7 per cent year on year to US$3.68 billion.

The performance of SCB is not dependent on any one market’s growth, the release stated, adding that Hong Kong, the bank’s largest market, represents less than 20 per cent of the Group’s income, despite a stand-out performance.

The bank’s business across the ASEAN countries of South East Asia is becoming increasingly diversified, according to the release.

It states: “We are now in all ten ASEAN markets, following our re-entry into Myanmar in February of this year, supporting clients trading both within ASEAN and with other regions.

“Singapore is a sophisticated, established market where we have a major presence, and it represents some 12 per cent of our income.

“Looking more widely across ASEAN, we have seen income growth in the Philippines of 22 per cent, in Thailand of 5 per cent and in Vietnam of 6 per cent.”

China has continued to be SCB’s biggest network income contributor, the release said, adding: “Our Chinese clients are mainly high quality corporates who are interested in building their businesses, exporting across our network and trading around the globe.”

Whilst expenses are up 3 per cent year on year, lower than underlying income growth, the bank is “investing selectively in improving its systems, branches and technology” to enhance the service it offers to its clients and customers.

“We focus on the basics of banking, maintaining our liquidity, funding and capital strength,” the release stated, adding that the bank’s balance sheet is in “excellent shape”, with an asset to deposit ratio and liquid asset ratio of 76.6 and over 28 per cent respectively; Core Tier 1 capital ratio is strong at 11.4 per cent.

Commenting on the bank’s results, SCB Chairman Sir John Peace said: “These results demonstrate the diversity and resilience of our business.

“Despite a difficult external environment, we continue to support our clients’ growth aspirations. We have a strong balance sheet and ample liquidity.

“We have entered the second half of the year with good momentum and the Board remains confident for the long term.”

Accounts payable: Amounts owed to trade creditors and included as current liabilities in the balance sheet.

Accounts receivable: Invoiced or billed amounts owing to a business which are outstanding from debtors and included under current assets in the balance sheet.

Balanced scorecard: A form of accounting that not only considers financial data and ratios, but also focuses on the market/customer perspective (e.g. market shares), internal processes (e.g. percentage of sales from new products) and organizational learning and growth, e.g. employee turnover and percentage of customer-facing employees with on-line access to customer information.

Capital budgeting: The process by which companies appraise investment decisions, in particular by which capital resources are allocated to specific projects. Capital budgeting requires firms to account for the time value of money, and project risk, using a variety of more-or-less formal techniques.

Database marketing: The use of information, held on computer systems, to undertake direct and pertinent communication with existing customers and/or prospects in the target audience.

Economic rent: Term used by economists to refer to profits or returns from an activity over and above those that would just be necessary to induce the participant into that activity. Economic rent may be thought of as abnormal, or super-normal profits. But it would be wrong to limit the term to companies – a rent can be any kind of surplus.

Fiduciary: A person or legal body acting on behalf of others who have a beneficial interest in investments or other property. An executor.

Hot money: Short-term flows of speculative capital, across national borders.Primarily aimed at drawing profit from possible changes in the exchange rate of different countries, hot money can be a problem for policymakers as it can destabilize the exchange rate in the process.

Source: The Penguin Int’l dictionary of business and finance