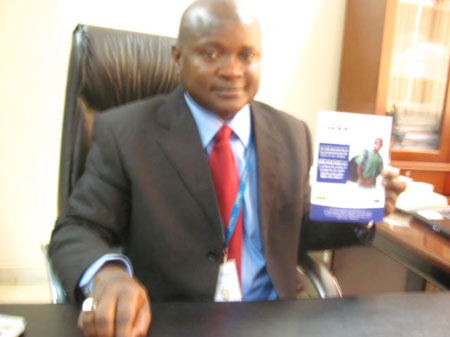 First International Bank (FiBank), one of the strong banks in The Gambia’s financial industry, has reinvented an appropriate mechanism through which parents and the society at large can prepare the young and nurture the culture of savings in them for the future because no one knows tomorrow.

The bank, which has various branches across the country, has redesigned an appropriate product for children called Child Trust Fund which helps to nurture the culture of savings for the future benefit of the child.

The Child Trust Fund account is user-friendly, it is affordable by everybody, says FiBank’s head of brand marketing and communications Baboucarr Sawaneh.

Mr Sawaneh explains further: “There are other people who would prefer saving in foreign currency - they may prefer savings in dollar, euro or pound sterling.  So for those foreign denominated accounts, each of them would attract an opening fee of an amount of 50 euro, 50 dollar or 50 pound sterling.  And then regularly you put in 50 of any of these currencies at the end of each month This is because we have some people who are resident in The Gambia but may not necessarily be Gambians, some their salaries come in euros, dollars, etc. so these are people we also want to attract as these are people also who can benefit from this product, and this is why we say if you don’t prefer to save in dalasis, you may choose to save in dollars, euro or pound sterling.”

The mere fact that the child is being trained to become an active saver is a benefit that is of invaluable measure, says the FiBank marketing and communications head.

“Now we are living today; we are healthy today; we don’t know what might happen to us as parents tomorrow. The continuity of the child’s education is never guaranteed because you don’t own your life; you are borrowing the life you are having; God could decide to make a stop to your living today, and if that happens what is going to happen to the child, especially if you are the only breadwinner of the family?

“And we are saying that if something could go wrong or something adverse could happen to the parents, the child’s education is guaranteed through our Child Trust Fund account.”

He continues: “The other aspect of it is the fund is not only looking at benefits for today; we are looking at benefit into the future. Globally at the macro level these children could become the future elders of tomorrow in this country, and we have already seen that some of the problems that we are seeing in the informal sector is because people were not saving before, but once we develop these children into active savers, by the time they become the drivers of the economy tomorrow, we would have comfortably said every driver of the economy is an active saver, so we would go pass the era when people – some of the drivers of the economy are keeping their monies in their safe in the house or are keeping their monies underneath their beds or so on and so forth.”

He also highlights the facts that institutions  are asking nowadays for accounts that bear the child’s name and not the parent’s name alone. “ I have seen so many children losing such opportunities going to university simply because they don’t own their accounts,” he said.

There is also another feature of the account he mentioned, saying: “We are also restricting withdrawals for the first four years of the account so that at least  it will be some form of a compulsory savings for the child. For the first three to four years of savings you cannot withdraw from the account, and within the four years of regular savings you are attracting interest unto that account at least at the normal interest-bearing rate for savings accounts. So we are not just keeping your money; but we are also increasing your money for you intermittently.”

Since  most of the children in the Gambia do not have their sponsorship directly coming from the country, FiBank  has transfer services in place through which money sent for school support to relatives who have FIB Child Trust Fund can be received directly within the bank and lodged into the accounts. These are Western Union, MoneyGram, Swift Transfer, RIA, and AN Express in the UK.

The Child Trust Fund is not the first of its kind for FiBank, Mr Sawaneh says:

Mr Sawaneh concludes: “It is easier to become an active saver when you have already been trained at the tender age. Most of us in Africa grow up to become lavish spenders; we don’t plan, we hardly look into the future, simply because we do not develop the habit of savings at the tender age. And this is why this vicious cycle of poverty is still in Africa.

This is why First International Bank came up with this product.”

401K (US):  A savings scheme under which employees may have up to 10 per cent of their salary deducted before taxation for investment in securities.

Group of five (G5):  An assembly of the Finance Ministers of the USA, Japan, Germany, the UK and France which met regularly as from 1975 to discuss matters of common economic and financial interest.

Interim dividend:  A dividend paid during the year instead of at the end of the year. Some large companies pay dividends quarterly.

Loss adjuster: An independent expert called in where necessary by insurers to assess an insured’s claim and to negotiate a settlement with the latter. Normally used for large claims.

Moratorium: An agreed suspension of repayments of principal and/or interest spread over a longer period. A number of countries have negotiated moratoria or rescheduling (which is effectively refinancing ) on international loans.

Overseas sector:  A term used in economic and money supply contexts to denote foreign transactions, i.e. individuals, companies and governments resident abroad that are trading with, or involved in investment transactions with, national residents.

Trust Bank:  A category of Japanese bank engaged in both banking and trust activities and also operating as savings institutions for the general public.

Vostro account: A bank account maintained by a correspondent bank on behalf a depositing bank in another country.

Correspondent Bank: A bank in one country that acts as an agent for a bank in another   country, e.g. in the transmission of funds.

Window guidance: informal direction by the Bank of Japan in respect of bank lending policies.