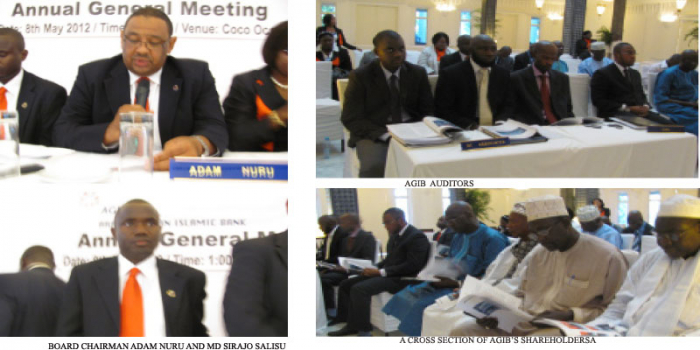 Arab Gambian Islamic Bank has pledged its commitment to fully explore its opportunities in the Gambian banking and financial market to yield a desired return to all stakeholders of the bank on a sustainedbasis beginning from 2012, after it has registered an after tax loss of D47 million for 2011.

In presenting the bank’s financial performance for the year ended December 31, 2011 at its annual general meeting (AGM) held yesterday at the Coco Ocean Resort and Spa in Kerr Serign, the Managing Director of AGIB, Sirajo Salisu, said: “During the year under review, there was significant increase in the Total Deposits of the Bank from D502M in 2010 to D545M by the end of 2011.

“The results for the year reflect an after tax loss of D47M from a profit of D1.2M in 2010 which is mainly attributable to the increase in our level of provisioning for non-performing facilities which decisions were taken so as to reposition the bank and return to profitability immediately.

“However, many areas of the bank’s operations and income lines performed well, especially foreign exchanging trading which contributed well over 79% of total earnings.

The aggregated level of non-performing loans increased from 23% in 2010 to 27% of the portfolio in 2011 reflecting our realistic provisioning policy over the last quarter of the year, it is a key aspect of our continued efforts in maintaining and improving the quality of our books.”

“Although cost of doing business is generally considered high, the bank’s total operating costs for the year amounted to D73.25M, which is high relative to the size of the bank.

“Beginning 2012 financial year, efforts are already in place to significantly improve the cost to income ratio of the bank through several cost containment measures and acceleration of revenue generating capacity.”

For AGIB, 2011 was a year of consolidation and conclusion of the clean-up of the bank’s books and the refocusing of its operations to deliver on its promise of being a premier Islamic Bank operating under the tenets of Islam but delivering valueaddition to all stakeholders, said AGIB’s Board Chairman Adam Nuru, while presenting highlights of the bank’s operating performance and reviewing the major developments that impacted the internationaland domestic investment in whichthe bank operated in the year under review.

“We have, in the period under review, strengthened our corporate governance, business practices and reporting processes in line with Islamic tenets and global best practices and are confident of the integrity of our records and processes,” he added.

Despite the storms and vagaries of the weather in the world financial system and the high standard adopted by the Central Bank of The Gambia through its recapitalization programme for banks from D60 million to D150 million by31December 2010 and D200 million by 31 December 2012, AGIB has been able to meet all the standards over the years.

“Alhamdulilahi, your bank was one of the banks that met the deadline,” said Chairman Nuru.

“However,” he noted, “our Shareholders fund has dropped to D123 million as a result of the provisions we took in the process of cleaning up our books. Consequently, as we move towards the final phase of the CBG’s recapitalization process, we are compelled to seek an additional D77 million to meet the D200 million minimum requirement. .. It is my belief, Insha Allah, that working together we will be able to meet this target come December 31, 2012.”

He continued: “Mindful of the challenges posed by the operating environment, especially the CBG actions aimed at stabilizing the industry, we have responded by refocusing on deepening pour market share while consolidating on our existing strength and unique product offerings.

“As we continue to strengthen our risk management platform and corporate governance, processes, we will invest in capacity building so as to improve our service delivery to our customers.”

In line with AGIB’s policy of giving back to the community, the bank has continued “to participate in various community-related activities, especially in the areas of health, small-scale rural businesses and individual-needy support, especially the physically-challenged”.

MD Sirajo Salisu concluded his report with the following words: “Arab Gambian Islamic Bank has more opportunities for profit than majority of its competitors, which we are pledging our commitment to fully explore so as to yield a desired return to all stakeholders on a sustained basis beginning 31 December 2012. In all aspects of operations our services will continue to improve to ensure ethical and professional competition in the industry.”

MD Salilsu and Chairman Nuru thanked and commended their shareholders, management and staff and their esteemed customers for their support, hard work and patronage over the years. 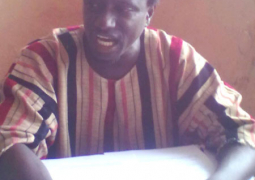