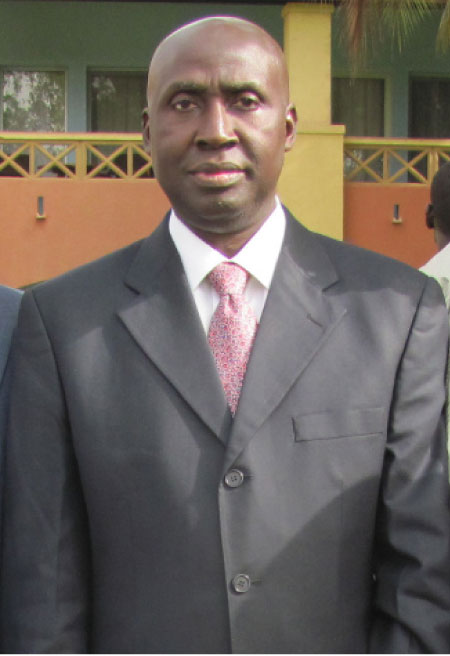 Being a man among men or a woman among women is a meritorious saying that signifies how great and exemplary someone is in any field of one’s calling. And if one of our Gambian banking captains is recognised and acclaimed continentally to be named a shortlisted nominee for the covetous African Banker Awards 2012 is a merit that needs to be written home about as it continues to excite the hearts and souls of The Gambian society, especially the banking milieu.

Trust Bank Managing Director Pa Macoumba M. Njie is a leading light in the banking fraternity, and his nomination for the African Banker Awards 2012 - whose winner will be announced at an awards ceremony on 30 May this year in Arusha, Tanzania - has rubbed more grease to his elbow, while serving as proof of his qualitative leadership role in the banking industry.

This is an accolade that speaks volumes of the attributes and work of the nominee considering the calibre of personalities in the financial and economic world of Africa that are included in the ranking.

Nigeria and South Africa compete neck and neck in the highly anticipated Bank of the Year category with Access Bank, FirstBank of Nigeria, Standard Bank Group, and Standard Chartered in the running; however they face stiff competition from heavyweights Equity Bank, Kenya; Attijariwafa Bank, Morocco; and Ecobank (ETI), Togo.

African Banker magazine has staged this competition to recognize and celebrate African banks and bankers who have excelled due to their excellent performance in the course of the year or targeted period.  “We are excited to recognize and celebrate these African champions in Arusha during the AfDB annual meetings,” Omar Ben Yedder, publisher of African Banker magazine, said. “The entries have become stronger year on year, and the Committee is impressed by the role financial institutions are playing in driving growth, especially the increasing number of big ticket deals and also smaller ones, creating a blueprint for others to replicate.”

But why is our own Pa Macoumba Njie of Trust Bank Gambia Limited shortlisted for the covetous award? It can only be said it is the good and exemplary work of the Gambian experienced banker that has been living after him. From Morocco to South Africa and from Somalia to The Gambia the exemplary work of bankers were assessed and judged before the selection was done. Pa Macoumba Njie is therefore shortlisted because of his leadership and extraordinary banking performance. This performance can be attested to via the performance of the bank whose ship he is steering.

Under the leadership of Mr Njie, Trust Bank Gambia has been posting impressive results over the years. In the last two years Trust Bank has been the leading bank in The Gambia in terms of performance and financial indices.

The bank registered remarkable achievement for the year ended 2011 by recording a D110 million profit after tax (PAT), which makes it an impressive 57.5% increase in profit, compared to the PAT of D69 million posted the previous year.

The bank’s performance in 2011 serves as a testament to the robust infrastructure and investment in personnel and technology that have been instituted by its Management “which should lead to sustained growth in profits thereby maximizing shareholders value into the future”.

Trust Bank’s culture of excellence has also won the bank numerous accolades from various institutions both within The Gambia and abroad.

The bank has also remained the Gambia Chamber of Commerce and Industry “Bank of the Year” since 2010, and holder of the prestigious award of “Bank of the Year in The Gambia 2011” from the Banker Magazine, a publication of international repute, which is the very magazine that has again nominated Pa Macoumba Njie for the African Banker Awards 2012, whose winner will be announced on 30 May this year in Arusha.

Under Pa Macoumba Njie, Trust Bank has over the years assembled and developed competent human resource management and staff that have led the bank to gain a competitive edge in the industry.

In line with their Corporate Social Responsibility (CSR) Trust Bank has continued its efforts at making a difference in the society at large. Over the years it has made substantial social investments especially in health and education, sports and the environment, which goes a long way to alleviating poverty in the country and creating development for the society.

These and other factors that I couldn’t highlight in this write-up have served as yardsticks in measuring up Pa Macoumba Njie for the covetous and prestigious Banker of the Year Award to be given out on May 30 in the Tanzanian city of Arusha. The heart of Gambia is with Pa Macoumba Njie as he goes to Arusha for the finale of the awarding process.
Share Article
Share on Facebook
Share on Twitter
Share by E-Mail
Share on Pinterest
Share on LinkedIn
Share on WhatsApp
Previous:
Brothers, pray for us
Next:
Musa Cassa Taal: GNOC Association’s Award winner