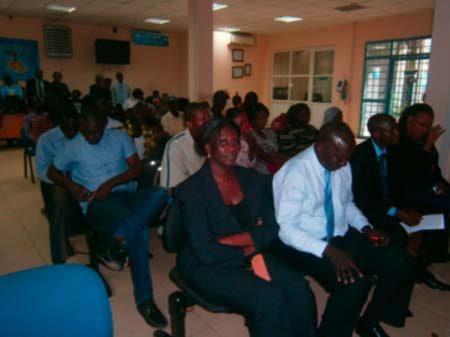 Three Ecobank customers emerged winners at the bank’s raffle draw held on Tuesday at its main office on Kairaba Avenue.

Bakary Kujabi, Michael Jobe-Mendy and Paul Chemish Mendy were the winners of the first draw out of 472 qualified members.

The prizes of the raffle, whose draw was held in the absence of all the winners, included a smart phone for the first winner, a vacuum cleaner for the second and a home theatre for the third.

Speaking on the occasion, Ecobank head of domestic banking, Fatou Jallow, told reporters that the draw, which was the first of another series, is expected to run in the coming months to be climaxed at the end of the year with a mega draw for a return air-flight ticket to the UK, a plasma TV and dinner for two at the Sheraton Hotel.

She said the draw was held at all Ecobank branches across the nation to show their recognition and appreciation for their esteemed customers.

Talking about the procedure, she said customers need to deposit a minimum of D5,000 into their accounts, to qualify for a raffle ticket and the draw.

As long as the customer maintains the said amount or more in his/her account, he or she will gain qualification to the draw, she said.

She said the bank is also engaged in similar activities through its corporate social responsibilities as well as with the security departments among others.

She said the customers can use their cards throughout the 34 member African countries for transaction.

She also said the bank hopes to increase the number of winners in the future.

The head of operations and technology, Lamin Sanyang, who spoke on behalf of the managing director of the bank, emphasised the significant recognition of the customers by the institution.

He added that customers are of great value to them as they contribute to the growth and development of the bank.

“Our employers are our customers and we will always be there for our customers,” he said, while extending gratitude to the customers for doing business with the bank.

He also said they as a bank do business with customers’ money, which is why they place premium on customer satisfaction.

He said they therefore feel it is incumbent upon them to give back to their customers in various ways, one of which is through raffle.