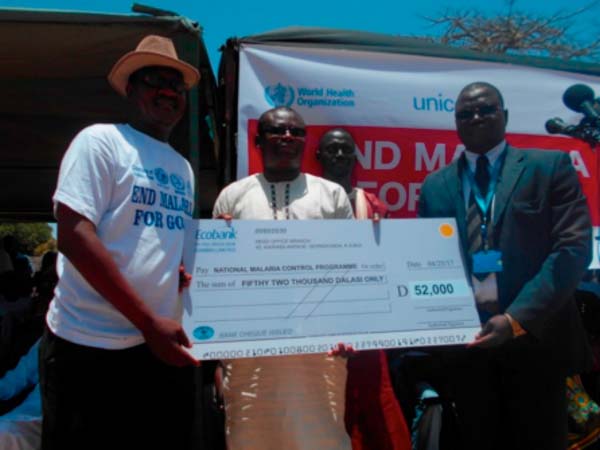 Ecobank The Gambia recently presented a cheque for D52,000 to the National Malaria Control Program (NMCP) in its drive to combat the elimination of malaria in The Gambia.

The cheque was presented to the NMCP officials through the permanent secretary Ministry of Health and Social Welfare, Dawda Ceesay, during the commemoration of World Malaria Day on 25 April 2017, in the North Bank Region.

Speaking at the presentation, Balla Kandeh, programme manager of NMCP, expressed profound gratitude and appreciation with Ecobank for their contribution towards the eradication of malaria in the country.

“We at the level of the NMCP through the Ministry of Health and Social Welfare are very much appreciative of the partnership and we hope this will continue in the future. We also acknowledge other partners in supporting the NMCP for making the celebration a success with this year’s theme: “End Malaria for Good”.

According to Mr Kandeh, to achieve this, there is need for all and sundry to join the effort to fight against malaria, a major killer decease.

Mr Kandeh also used the opportunity to challenge other banks to emulate Ecobank, saying malaria is a cause for concern.

Without health, he noted, people could not make any meaningful development hence health should be a priority for all to ensure people have healthy mind and environment.

In his remarks on the occasion, the permanent secretary at the Ministry of Health and Social Welfare, Dawda Ceesay, commended Ecobank for the gesture, saying the bank is a real partner in development.

Considering the effects of Malaria, there is need for all sectors to join hands to fight against the decease, he said, adding that the ministry acknowledges the contribution of the bank.

PS Ceesay also used the opportunity to thank all those who contributed in one way or the other to making the day a reality.

He urged other banks operating in The Gambia to emulate Ecobank, saying the bank’s support to the NMCP was geared towards complementing the efforts of the government in its drive to end malaria for good.

“We at the Ministry of health cannot do it alone; therefore, we need the support and contribution of everybody, especially the banks, to help us eradicate malaria in our society, community and environments.”

He commended the staff and management of Ecobank through their Managing Director for the initiatives, and assured them that the funds would be used judiciously to combat malaria in the country.