The US has pledged US$500 million and 3,000 military personnel who would not get in contact with Ebola patients in Liberia.

Senegal says no risk of Ebola spreading from imported case.

The 21-year-old Guinean who was admitted on 29 August 2014 at Fann Hospital in Dakar had recovered, and left Senegal Friday 19 September for Guinea on a special flight.

Senegalese Minister of Health Marie Awa Coll Seck said 74 people who had contact with the young Guinean had no sign of the virus, after being examined for 21 days.

The French nurse who contracted the virus in Guinea has received experimental treatment in a Paris hospital.

Sierra Leone has completed its three-day nationwide lock down, from 19 to 21 September 2014, to allow health workers to examine the 6 million inhabitants of Sierra Leone. Within the three-day lock down 25 cases and 70 dead bodies were said to have been discovered. The country’s burial team was attacked in Freetown despite the lock down.

Thousands of Sierra Leoneans fled to Guinea in the past few days, prompting Guinea to close its border with Sierra Leone.

Hence Guinean health authorities have appealed to Sierra Leoneans living in Guinea to respond to a registration exercise and be examined.

Meanwhile, about 8 health workers in a village called Kegoudou in Guinea on a mission to sensitise villagers about Ebola, were attacked with axes and stones. The villagers said they do not believe in the disease.

Nigerians have been fortunate to go to Mecca to perform this year’s Hajj despite the Ebola virus, which was discovered in Nigeria in July this year and has claimed eight lives.

Meanwhile, CAF upholds the ban on games in Guinea, Liberia and Sierra Leone. 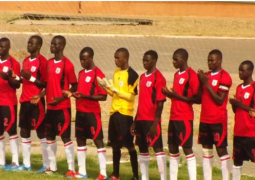