The Liberia Ebola patient who is currently in the USA and hospitalised in Dallas is in a serious condition.

He went to the US on 20 September 2014, with no sign of the virus, but after five days the virus was discovered.

Liberia has confirmed that the Ebola patient showed no symptoms before leaving the country.

There has been no other suspected Ebola case in Texas where the patient was staying.

Health authorities said five people are under surveillance in Dallas after having contact with the patient.

WHO warns of potential more risks in Africa, as the Ebola death toll rises to 3,338.

A leading charity has warned that a rate of five new Ebola cases an hour in Sierra Leone means healthcare demands are far outstripping supply.

Save the Children said there were 765 new cases of Ebola reported in the West African state last week, while there are only 327 beds in the country.

Experts and politicians are set to meet in London to debate a global response to the crisis.

It is the world’s worst outbreak of the virus, killing 3,338 people so far.

There have been 7,178 confirmed cases, with Sierra Leone, Liberia and Guinea suffering the most.

Save the Children says Ebola is spreading across Sierra Leone at a “terrifying rate”, with the number of new cases being recorded doubling every few weeks.

It said that even as health authorities got on top of the outbreak in one area, it spread to another.

The scale of the disease is also “massively unreported” according to the charity, because “untold numbers of children are dying anonymously at home or in the streets”.

“We’re in a race against time,” said Justin Forsyth, the organisation’s chief executive.

Speaking on the BBC’s Today programme he said that the figure for Sierra Leone could rise to 10 people every hour before the end of the month if urgent action were not taken.

Meanwhile the head of the UN’s mission to combat Ebola warned that the disease was spreading “very rapidly” and that a “massive international response” was required to deal with the crisis.

Anthony Banbury, who is in Liberia, said more needed to be done to educate remote communities about how to protect themselves from infection. 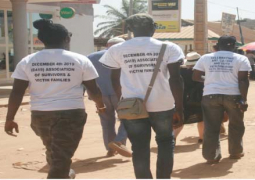