Magistrate MLK Bojang of the Kanifing Magistrates' Court on Wednesday convicted and sentenced one Fatou Jagne to a fine of D3, 500, in default to serve three months in prison.

According to the charge sheet, the convict on 21st May 2010, at Ebo-Town discharged liquid wastes water from her compound into the public street.

In narrating the facts, the prosecutor of the National Environmental Agency, Muhamadou Jallow Jabang told the court that the incident happened on 21st May, 2010, when the inspection team was on patrol.

He narrated that on reaching the convict's compound, they found out that the convict had discharged liquid wastes water from her toilet and other parts of her compound into public street.

The convict, who pleaded guilty to the charge, begged the court to temper justice with mercy. 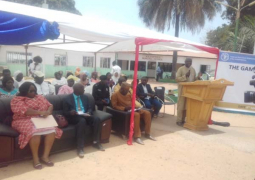