Lamin Bayo, a resident of Brikama Wellingara recently testified in the trial involving Sarjo Manneh, who is charged with assault causing actual bodily harm at the Brikama Magistrates' Court.

In his testimony before magistrate Baboucarr Secka, the second prosecution witness, Lamin Bayo told the court that, on 13th May 2010, he went with his friend, Modou Lamin Sowe to their cashew farm and upon arrival, there they met the accused sitting near a compound, opposite a cashew farm. He testified that they decided to jump over the fence to get on the cashew tree when the accused shouted at them and asked them what they were doing there. It was then his friend, Modou Lamin Sowe told the accused that it is their garden, he told the court. He adduced that on their way home, Sarjo accused them of destroying his corrugated iron sheet and subsequently insulted them.

After few days, he added he again went with his friend Modou Lamin Sowe to look for cashew nuts, where the accused followed them with a bicycle and found him on top of a tree.

He said the accused asked him to come down or else he would climb after him, adducing that it was when he decided to come down, but before he could reach the ground the accused pulled him down. Further testifying, PW2 told the court that he fell down and the accused started beating him with a stick, telling him that he would kill him. He added that when he managed to take the stick from him, both of them ran away and he later informed his sister, one Mariama Bayo about it.

The case was adjourned to 5th July 2010 for continuation. 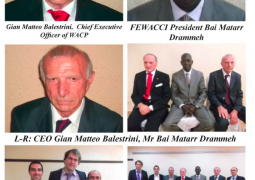