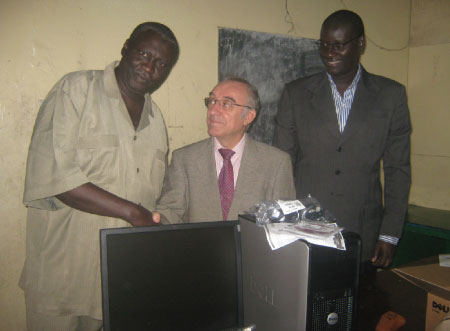 The French embassy in through its charge d’affaires in , Jean Marc Trason, Tuesday presented a brand new Dell computer to the management of The Point newspaper to facilitate the publication of its French language column and news page in the daily newspaper.

The presentation ceremony was held at The Point newspaper office in Bakau New Town, and comes weeks after the French Embassy also funded the maintenance of The Point printing press.

“It is more than my pleasure to offer you our support, which we believe will go a long way in strengthening your work and in promoting the French language and culture in The Gambia,” Jean Marc Trason told our reporter shortly after the presentation.

“We are friends together, and it is normal that we help you in your work as journalists. We will continue doing our best to help you, especially in promoting the French language in The Gambia,” he added.

The French Charge d’Affaires also told our reporter of his continuing drive to further strengthen the relationship between The Gambia and France, citing the link between the community of Bellac in and the community of Sifoe in the West Coast Region of The Gambia.

In receiving the equipment, Pap Saine the managing director of The Point newspaper commended the French Embassy through its charge d’affaires for their timely intervention, noting that the computer will further enhance the work of the newspaper.

“This is a very good development, as we are the only bilingual newspaper in this country. We are proud to promote both the English and French languages. We are also the only paper in The Gambia that won two international awards, one in 2006 in , and another in 2010 when I myself was named by the International Press Institute (IPI) as one of the 10 World Press Freedom Heroes in the world in ,” Saine further stated.

He commended the French Embassy in for funding the general maintenance of The Point printing press, describing the move as timely and a step in the right direction.

Saine assured the French diplomat of The Point’s readiness to promote the French language and culture in The Gambia.

According to the newspaper publisher, all that The Point wants is to promote divergent views and dissenting opinions as stated in the Constitution of the .

Madior Diop, the French language columnist of The Point newspaper, commended the French Embassy for the gesture, noting that it will go a long way in facilitating his work with the newspaper.

I-Click US Company at Industrial Tribunal