Narrating the facts of the case, Police Prosecutor 1st Class, Lamin Jammeh told the court that it happened on 23rd April 2010, when Lamin Manjang met Modou Gaye near a shop, where he was selling a motor tape.

He narrated that Lamin Manjang then asked Modou Gaye where he got the motor tape, and in reply, he said "it was not his business."

Officer Jammeh further stated that, Modou Gaye later borrowed D100 from Lamin Manjang, adding that during the process of the payment a problem ensured between them resulting in a fight. He said the matter was reported to the police and both of them were subsequently arrested and charged with the offence committed.

In plea of mitigation, both of them begged the court to temper justice with mercy. 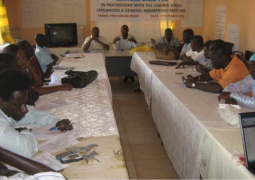