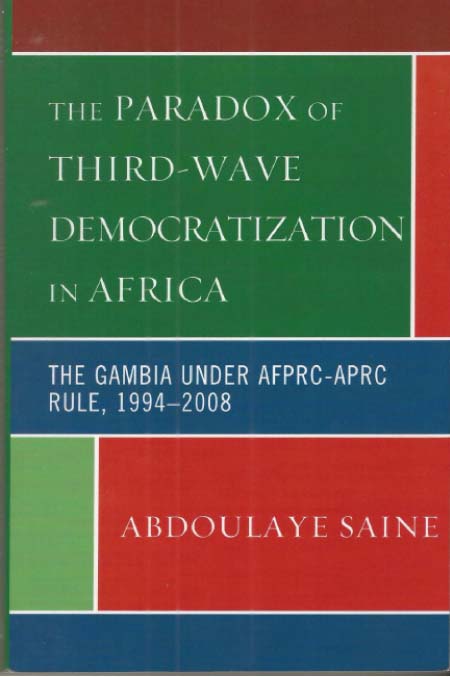 Professor Saine has been in the forefront of the fight to end the 22 years of tyranny under Yahya Jammeh. As head of many pro-democracy groups based in the USA. What he has done equally well also was to write consistently on the assault by Jammeh on Gambian democratic values since 1994 in a series of journal articles and now in this excellent book whose full title is ‘The Paradox of Third-Wave Democratization in Africa’. It has to be said that this is not a popular work; it is highly academic and so the ordinary reader may find it rather heavy with information and analyses; yet, it is the most comprehensive and updated work on the Jammeh era.

The book is divided into 10 chapters. The first two chapters lay out the theoretical framework for the work. In chapter three onwards, the author masterfully dissects the junta rule of 1994-1996, the so-called Transition to civilian rule, (p.230). But before doing so, the author gives a thorough background of the last years of the ousted Jawara regime. He was quick to conclude that although Jawara was a benign and measured leader who ‘crafted and personally presided over a moderate foreign policy’, his regime had shortcomings.

The military coup of July 1994 latched onto these shortcomings to justify itself. Here even a respected scholar as Saine did not wink in calling the coup as ‘bloodless’ (p.1) even though we all now know that the bloodletting was only kept in abeyance; in the coming months and years, our country was to be stained in blood as the Jammeh infernal machine worked overtime against perceived and intending enemies such as human rights activists, journalist, political leaders, and ordinary people.

Ironically, even the security forces were not spared the tyrant’ whip :an issues well discussed on page 82 where Professor Saine gives a heart wrenching account of the harsh violations of the rights of people in uniform under Jammer’s rule. It seems the guillotine’s blade was now re-oriented towards chopping off the necks of the perpetrators of the 1994 coup. The so-called revolution was eating its own makers. This according to the author was the apotheosis of the tyranny.

Further into chapter six, the author reveals that under Jammeh the Gambia was a most corrupt society, p.91. Therefore, already the regime which came to power under the banner of transparency and probity was now mired in corruption from top to bottom.

On page 127, the learned author asks a rhetorical question worth asking: ‘has The Gambia moved closer to ‘democracy’ after three presidential elections’, he answered no! Indeed, he reveals that under Jammeh, elections were mere rituals to hold each lustrum to have a veneer of legitimacy and nothing else. The despot never believed in elections as democratic procedures, but he knew he needed to be seen to be holding them as a way to distract.

The last chapter is indeed worth reading thrice over. Here he suggest ways forward in a  post Jammeh era. He suggests a Truth Commission and or a National Conference to settle our bleeding wounds. When he wrote these ideas, no one saw Jammer’s fall from power so soon and therefore, Saine’s postulations are worth reading especially by our policy makers to ensure a smooth entry into the Third Republic.