Over the weekend youths from the Kombo celebrated their patron's day at the St. Matthew's Catholic Church in Barra, spending the whole day together in joy.

During the sermon, Rev. Fr. Joseph Karl Gomez asked if they were ready to leave the baton with the youngsters. "If we are ready there should be no barriers, we must continue to create the environment," he said.

Fr. Karl said Jesus brought in a child and said, if they wanted to go to Heaven they should humble themselves like little children. Everybody, he said, wanted to be a president, a manager, a teacher, a CEO and more but he stressed that it all comes with responsibility. Using a child as an example, he said children are humble, loving, forgiving, understanding, tender hearted and more. He said the youths were to go the extra mile by helping others. We must be like our patron saint, Don Bosco. Many people, he said have blamed their woes on their parents or the government for not doing much for them but they fail to ask themselves what they have done for their government.

Fr. Karl asked the youths to look for something to do. One must start somewhere. Some think they should be in white-collar jobs. Children used to sell bananas but now they find it difficult. He said, "When I was teaching at St. Joseph's Senior Secondary School, I suggested to the girls that they should do holiday jobs by selling food stuffs and that before the end of the holiday they would have had enough money for their school fees. But one of the girls said it was impossible for them to sell. People think sin is limited only to fornication, theft etc. but not using our talents is sin too according to Fr. Karl. He said Don Bosco, their founder, was poor but he discovered his talent and developed it.

Peter Rogers gave the vote of thanks. Bakau youths out numbered the other youths with a hand full from Fajikunda and other parishes.

The youths had a Musical Chairs competition. There was tough competition between the twelve participants and David Noah from a Bakau parish won first place. 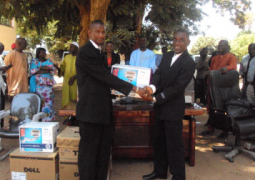