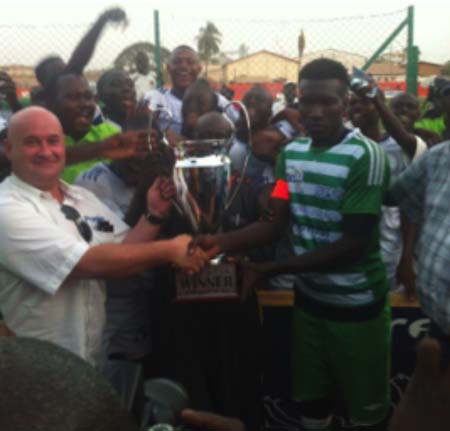 Goals from Alagie Bah, Famara Jarju and Madi Fatty in the 5th, 54th and 77th minutes for Realwere enough to ensure Salifu Kurubally’s own goal in the 60th minute only proved to be a consolation for Banjul United.

As winners, Real De Banjul FC went home with a giant a trophy and a cash prize of D75, 000 while runners-up Banjul United collected D50, 000.

Speaking to reporters shortly after the game, Amat Cham, Real De Banjul, said history was on Banjul United’s side and for that reason Real De Banjul wanted to come and re-write history. Cham added that their objective was not only preparing for Banjul United, but for the league.

The thanked the players who made it possible to win.

“Real De Banjul is a winning team and we go into every competition to win”, he declared, when asked if we hope to see the team going for a back to back win of the league title.

Real De Banjul is registered to play in the CAF Champions League, he confirmed, and announced that they are preparing for the competition.

He described Real De Banjul as a big team, and that his side respects them. His side played to a game plan, but the early goal conceded was a big blow, Touray added.

Real De Banjul are the big and best team in the Gambia and that was why they won the league title, he said, while giving them credit.

Their target this season is maintaining themselves in the first division league and giving a respectable performance, the City Boys gaffer said. Banjul United’s opening game of the league is against Gamtel FC.