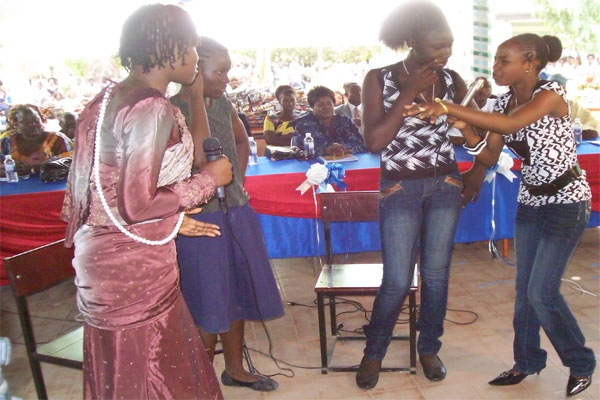 Drama seen by many  as a way forward to development of society is under microscopic view by Adebayo Akintunde Smith analyzing the role drama can play in society, its impact on politics, culture and everyday life. What goes on within society without people knowing about it could be brought out through drama to correct those ills. Culture is portrayed and seen at work bringing back people to the reality of life. Man by nature loves story telling, with drama the reality of story telling is put into action to help bring out the reality into play. Please read on for us to make drama vibrant in our schools and society.

It may seem strange that Drama should be considered as an instrument of political and mass mobilisation in the Gambia, other than as relaxation education and entertainment, Drama is indeed a very dynamic art and its functions make it possible to be utilized to achieve various ends. Greater potentials as a means of human inquiry and expression would facilitate the appreciation of its importance.

Politics is the art of governance. To be able to govern the people, they need to be educated and informed through all means at government's disposal. The traditional institutions for education and information are the schools, colleges and universities and other religious institutions like churches, mosques etc.

The mass media in the Gambia have been used and are still being used for political matters in various ways. The mass media have been used to enhance the political consciousness of the people. It is a medium of mass education and which can forster the theory and practice of association between citizens. It teaches group participation and team work which is indispensable to a community.

Apart from the mass media, drama can also be use by the government to make their programme known to the people. The theatre and the media provided a source of informal education system for people who have outgrown the formal school.

Drama is one of the most viable weapons for the critical objective and result oriented analysis of a nation crying for re-birth. It is an agent of mass mobilisation and expression because it is imaginative communication. Drama is a form of social consciousness, an important weapon in the ideological struggle of classes. The vivid images which drama evokes affect the conscious of the audience. Drama can go a long way in defending class oppression and could contribute to the socio- political education of the telling masses provided that the drama is culturally relevant and should specifically address Gambia's social reality using truly, Gambian speech, patterns, and movement and visual structure.

Drama can be used to play a vital task of re-orientating and correcting the society through emphasis on awareness and change. It is the most economical mode of expression which can convey an idea that can be accepted as true. Drama's impact is direct and more immediate than other forms of expression. It is a form of inculcating social and political value that encourages people to take an interest in the political culture of the country.

All drama is necessarily political because all the activities of man are political and drama is one of them.

Those who try to separate drama from politics try to lead a political attitude. Both drama and politics deal with the same subject, human beings and human relationship in a human world. The drama aims at influencing people's consciousness, including political decision and social attitudes.

As a matter of fact, the government should encourage the development of drama in other to play a major role in increasing both the pace and standard of education as well as enhancing the political consciousness of the people. The practitioner should be allowed to form a formidable force that would be accepted and recognized like the labour union, National union of journalist, national union of teachers etc. this body will be able to fight their cause and lobby the government for assistance and support. It will enhance and hasten the development of film industry and film production in the Gambia and be able to compete favourable with other industry in Africa and the rest of the world. The body-will also serve as a regulatory body for the practitioners, the people and the government.

Schools have basked in past glories when many organisations brought home their visions about their organisations in view of what the want the communities to know about. GRTS had stated children's drama as a programme on their television but it was short lived. This had called children to attention as they come to see each drama. The drama caused many children to rate their fellow schools as either good better or best better still the worst school.

Parents had gained a lot from them especially drama that carried drama close to their hearts. Drama on HIV/AIDS, sanitation, refuse disposal, theft, jealousy, prostitution, laziness and more have taught a lot of lessons, helping the government to cub crime and other problems.

An association to deal with National Drama Group in schools would enhance a lot in line with what we think is vital for children and society. From such, children could be trained in acting and further studies provided to enhance their acting capacities for a wider industry in film production. These children or big people involved would be able to entertain the populace to get rid of their day's stress by laughing out their problems at seeing their normal life situation at play. The government and school authorities should see this as reality and help children to help the society. Children and a lot others have potentials but are not utilized to their full potentials. As they wait to be utilized, may someone there stand to help out in time to make the community a place to enjoy.