Sheriff Kumba Jobe, the defence counsel in the case involving Babucarr Njie, a soldier who was found with a pistol at the King Fahd Mosque in Banjul, recently told the Banjul Magistrates’ Court before Magistrate Isatou Janneh-Njie that the accused had no case to answer.

He made this remark after the closure of the prosecution case.

In a written no-case submission, he said the accused was charged with going armed in public.

He also stated that the prosecutors alleged that on 10 February 2017, between 13:30pm and 14:45pm, in the city of Banjul, Babucarr Njie was found armed with a Helwan Pistol with eight-life rounds without lawful occasion in such a manner as to cause terror to the members of the public.

He posited that when the accused was arraigned before the court, a plea of not guilty was entered, thus resting the onus on the prosecution to prove the guilt of the accused beyond reasonable doubt for the offence charged.

He indicated that in his evidence, Jally M.I. Senghore said that on 10 February 2017, he obtained voluntary and cautionary statements from the accused.

Counsel Jobe adduced that the prosecution applied to tender the statements but the defence objected to the statements and the court ordered voire dire (trial within a trial), adding that at the end of the voire dire, the said statements were rejected.

He stated that in cross-examination, the witness explicitly admitted that the only thing he knew about the case was that he obtained the voluntary and cautionary statements.

He added that the evidence of the witness was of no help to the prosecution in proving its case against the accused.

He further posited that under cross-examination, the evidence of Inspector Abdoulie Bojang, the second witness, was successfully challenged, controverted or discredited by the defence.

He said the witness was contradicted himself and proved to be unreliable.

He submitted that the evidence of Ebrima Fatty was also successfully challenged, controverted or discredited by the defence under cross-examination.

He argued that it was established by the defence that the witness was lying about his status as a  civil servant, adding that he contradicted himself and that his evidence also contradicted the evidence of PW2.

He said both witnesses were unreliable and their evidence was an attempt to manufacture falsehood to secure illegal conviction of the accused.

Counsel Jobe posited that it was the evidence of the fourth prosecution witness, Babucarr Bah, that he carried out before ballistic examination on similar guns and ammunition like the ones found with the accused.

He added that this piece of evidence created reasonable doubt as to whether it was the actual gun and ammunition allegedly found in the possession of the accused that was submitted to the witness for ballistic examination.

He stated that the court could not speculate on this piece of evidence but rather to resolve the doubt in favour of the accused.

He argued that under cross-examination of Famara Kambi, the fifth prosecution witness, it was clear to everyone that the witness was lying to the court and his evidence was false.

He added that his evidence was also challenged, controverted or discredited and rendered the evidence highly questionable and unsafe for any reasonable court to place reliance on it.

Counsel Jobe submitted that the sole issue for determination of the case was whether the prosecution had established a prima facie case against the accused enough for him to enter a defence.

He said that it was the law that a no-case submission could succeed in circumstance where the prosecution had failed to establish a prima facie case against an accused person.

He further stated that to determine whether a prima facie case has been made by the prosecution, the question that the court would consider was whether upon the totality of evidence before the court there was a ground to proceed with the case.

He cited some authorities to support his argument.

He submitted that the prosecution had failed woefully to establish a prima facie case against the accused sufficient enough to warrant him to enter his defence, adding that the elements of the offence had not been proved by the prosecution.

Inspector Bojang is expected to file his reply.

The case was adjourned until 31 July 2017, for adoption of briefs. 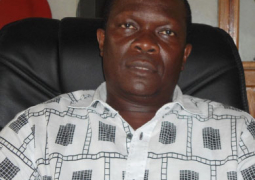